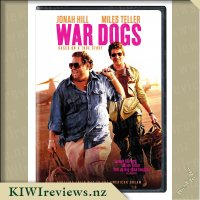 Two friends (Jonah Hill and Miles Teller) in their early 20s, living in Miami Beach during the Iraq War, exploit a little-known government initiative that allows smaller businesses to bid on U.S. military contracts. Starting small, they begin raking in big money and living the high life. But the two get in over their heads when they land a $300-million deal to arm the Afghan military - a deal that puts them in business with some very shady people, including the U.S, government

I was intrigued by the idea of this movie on two counts. First, it was billed as a black comedy - something that appeals to my sense of humour! Secondly, it was based on real events which seemed rather far-fetched, so I was keen to see how the director would translate this to the screen without turning it into an all-out spoof.

I thought the opening sequence was really effective. Initially it appeared to be setting the movie up to be a thriller, but very quickly it switched to voice-over, computer graphics, and cynical references to the "real meaning" of war - financial gain! From then on, the serious elements were tempered by humorous observations and a series of potentially lethal adventures which somehow bypassed either of the main protagonists being seriously injured.

I liked the choice of the two lead actors - physically they were quite different, and it was reassuring to see one of the main characters (Efraim Diveroli) played by someone who was not all abs and fake tan (Jonah Hill). It added to the realism that he looked like an everyday person rather than a male model. This is not always the case in buddy movies; often the casting director will choose people of different races to highlight their diversity, but invariably both of them are conventionally beautiful.

I found that the movie was drawn out in some places, particularly where there were long transitions between main events. For me, one of the characteristics of a comedy is that it is fast paced and holds your attention throughout. I would have preferred less analysis and more action. I watched the movie three times altogether but I still think it could have been 15 or 20 minutes shorter. At the same time, I did not think the female lead (Iz, played by Ana de Armas) was particularly important to the plot; she could have been left out altogether or her role expanded to be more relevant. I also thought the dialogue was uneven in places, and the continuous swearing would have been more effective if it had been less gratuitous.

I did like the soundtrack! I watched the film the first time through with three other people (one of whom had already seen it as he had his own copy) and the consensus was that the music was nicely matched to the action. Most of it was post 2000, but there was the occasional flashback to the last century with some grand opera and musical standards thrown into the mix. I even recognised Leonard Cohen accompanying the end credits!

I watched this film to be entertained, and that was certainly the case. The implausible plot, the amazing loopholes in military dealings which set themselves up to be satirised, and the generally high standard of acting from the entire cast, all made it a film worthy of watching. (I would also like to make special mention of the "Pentagon Pie" cartoon which is included on the DVD along with the movie; to my mind, this is funnier than the movie itself and certainly puts the whole system firmly into perspective.) War is a grim subject at the best of times but this is not a film that glorifies war; rather; it concentrates on the peripheral outcomes that it spawns - some reassuring, some disastrous, and some (as in the case of this film) guaranteed to make you wonder what the real gain might have been.