Home > Categories > Movies > Sci-Fi > Back to the Future review

Back tot he Future: Part 2 review

ProdID: 5184 - Back to the Future
Directed by Robert Zemeckis 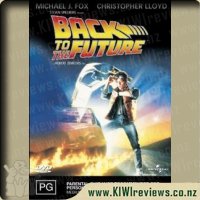 Back to the Future product reviews

During his often hysterical, always amazing trip back in time, Marty must make certain his teenage parents-to-be, Crispin Glover and Lea Thompson, meet and fall in love - so he can get back to the future.

The movie that made DeLoreans a household name.

Marty McFly lives at home with his parents, he has a brother and sister, his dad is weedy and still picked on today and his mum just muddles about. Marty is friends with the Doc, a mad scientist, and when he meets Doc at a mall late at night, he ends up jumping in the DeLorean to escape and finds himself in the past. Now he has to fix things (after accidentally causing his mum to have a crush on him) or he and his siblings will never exist.

For a movie of its time the special effects are good, there isn't a lot in the way of explosions, in that there are only a couple, but what there is is done well. There are plenty of laughs, some you need to know the context behind them, but if you've seen enough of the pop culture of the time then that isn't an issue. The good thing though is that there are enough jokes to laugh at and enjoy, some fun action and a funny moment involving manure that repeats in the future instalments of this trilogy.

Back to the Future is a fun movie, one that I can't wait for the kids to be a little older so they can watch it with me.

THE A-TEAM follows the exciting and daring exploits of Hannibal Smith and his colourful team of former Special Forces soldiers who were set up for a crime they did not commit. Going "rogue," they utilize their unique talents - and eccentricities - to try and clear their names and find the true culprit.