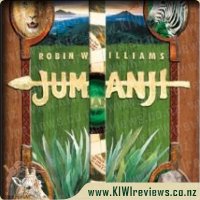 It's a jungle in there!

When young Alan Parrish and his friend Sarah begin to play a mysterious board game, they don't realise its unimaginable powers until Alan is mysteriously transported into the untamed jungles of Jumanji.

Twenty-six years later, Judy and Peter discover the dusty board game and begin to play. Instantly the forces of Jumanji release a fully-grown, bewildered Alan Parrish (Robin Williams) into their world. With each roll of the dice they must face the increasingly terrifying consequences until the game is finsihed and the victor has uttered the word .. "Jumanji!"

I first saw this film, in the cinema at the tender age of 5. Wanting to see Toy Story, but my friends had already seen it, so we went to see Jumanji instead. In all honesty, it scared me. If memory serves me correctly, I was that kid that was in tears when a lion decided to leap at the screen.

Looking back, times have changed and that I doubt a 5 year old would find that lion scary any more, but I still wonder why this was made into a family film. The plot is a great; finding a board game that literally immerses you in the game, penalising cheaters, trapping players, and unleashing untold horrors until the game has been finished. I would still find this to be more suitable for an older family (7+).

Beyond age suitability, it was an interesting film, but still remained one that failed to get me engaged, and I was personally not a fan of Robin Williams character in this film. It most likely came down to the cast not appealing to me, as there was an interesting plot, with plenty of action, which I would normally love.

But this was not a great film in my eyes. I could imagine a great horror remake of it. I'm thinking 'Jumanji' meets 'Cabin in the Woods'.

I loved this movie, the plot was too good to pass up. The board game that comes to life and you have a great adventure without leaving your home and as usual no one reads the warning and beware signs.

The special effects were great, you almost believed that the game was coming to life and you felt sorry for the players having to battle giant spiders etc. I love Robin Williams and he delivered yet another great movie, he was believable as an adult Alan Parish who had disappeared into the game and lived in the jungle for 26 years.

I loved how they worked out that they needed Sarah to finish the game and he didn't hesitate to go and talk to her and how he didn't think twice about tricking her to play the game. There were parts I was wondering how on earth they could even get out of the predicament they were in to finish the game but logically I knew they would have to finish the game or there wouldn't be much of a movie.

I have it on DVD and watch it when I'm feeling down and need a laugh and reminding that life could always be worse.

Ever played a board game and wondered what it would be like in real life? Enter Jumanji, where every role of the dice brings something to life. Young Alan Parrish finds a mysterious board game and ends up playing it with local girl, Sarah. But they don't realize the power of the game and Alan gets sucked into the board game. Twenty-six years later orphans Judy and Peter find the game, start to play and end up releasing Alan. Now they must find Sarah and finish the game or all the horrifying creatures remain.

Nearly twenty years later and Jumanji is still a wonder of a movie. Robin Williams is in one of his best movies ever as he plays the now grown-up Alan Parrish. The special effects also stand the test of time really really well giving us a movie that almost twenty years on is still just as fun and frightening as it was when it first came out.

This is one of those movies that I have never stopped enjoying. It's a wonderful, timeless movie, and I am sure that when my children are old enough to enjoy it that they will like it just as much as I do.