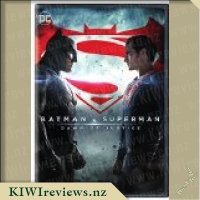 Disclosure StatementFULL DISCLOSURE: A number of units of this product have, at some time, been supplied to KIWIreviews by the company for the purposes of unbiased, independent reviews. No fee was accepted by KIWIreviews or the reviewers themselves - these are genuine, unpaid consumer reviews.
Available:
20 July 2016

Meanwhile, a new danger is rising that will put both Batman and Superman to the test. Can they set aside their differences to handle this unprecedented threat to humanity, and what role does Wonder Woman, the newest hero to arrive on the scene, play in all of this?

Moreover, how will these heroes deal with the other forces that are seeking to take advantage of the ensuing chaos? I was very excited when I heard this movie was being made, as I am a huge fan of the Dark Knight Batman Trilogy. Superman, I've never really liked as much, he's just always seemed so perfect that it irritated me, but the idea of him going against the much more human, more grounded, and dare I say realistic character of Batman, had me very much fizzing with anticipation for the film. Now this film is the beginning of the DC Extended Universe (not unlike the Marvel Cinematic Universe) which aims to bring future cinematic releases into the same world, with the actions of one film affecting the rest. While 'Man of Steel' was the actual first film in the DCEU, 'Batman vs. Superman' is the first film to actually refer back to a previous film and have it play a large role in the justification of the story line.

Now before I saw the film I can say that I was skeptical about Ben Affleck being the new Batman. With a much squarer build, and seemingly shorter stature compared to previous Batmen, and not forgetting the lacklustre performance he put forward for his previous attempt at a superhero (DareDevil), I had very little faith that he would be able to pull it off. In retrospect, I found that Ben Affleck was probably one of the best things about this film. However, the film itself seems to attempt too much for one movie. With multiple comic book (graphic novel?) storylines interwoven into one film, introducing and explaining four new characters, dream sequences hinting to future villains, and wasting what is considered to be one of the best villains, this film bit off far more than it could chew. Even my sentences are attempting to input too much content as I try to outline the film.

One thing that I enjoyed about this film, is that we get a lot more of Bruce Wayne than we do Batman. It's a refreshing change to past incarnations; we finally get to see Bruce Wayne, the detective and rich socialite, using his brains, technology, and his status to do more than fund bat costumes and bat vehicles. We have a much older, battle-hardened Batman who has had a lifetime of trying to defeat the constant uprising of criminals, and the effect that this has had on him is evident in his much more brutish fighting style. Henry Cavill (playing Superman) is much the same as he was in 'Man of Steel', a more polished looking Superman, but a much darker, less optimistic character than past iterations.

While I enjoyed watching Clark Kent and Bruce Wayne running around instead of their alter egos, I found that the film was dragging on. I had signed on for a Batman vs. Superman fight, and it took two hours to finally get to the action (which lasts a good 8 minutes). Lex Luthor had a rather unlikable personality that irritated me more than anything, and it made me focus a lot more on finding plot holes, than trying to enjoy the film. Gal Gadot's appearance as Wonder Woman was impressive. With so little actual screentime, she managed to impress me enough that I am genuinely looking forward to seeing her solo film. One of the best portrayals of a female superhero I have seen so far, with her actually having lines and conversations, and not just being something to look at.

A lot of content is missing from this film (the full 'Ultimate Edition" runs for over 3 hours), and because of this, a lot of important details are missing, so we never get the full picture, and it makes justifying their actions difficult. The fight scenes were enjoyable, with a great Batman scene including some hand-to hand combat in a warehouse, that was beautifully choreographed. But the final battle ended with a bit of an anticlimax; it was predictable, and unnecessary. The special effects themselves were great, and I couldn't fault them (apart from the cartoonish appearance of Doomsday, which was cringe-worthy), but I would have loved a little bit more colour.

To sum it up, there was too much content in the film. A lot of build-up, but very little of what we actually wanted to see. Ben Affleck was a great Bruce Wayne, and Gal Gadot was an amazing Wonder Woman.

Unfortunately this movie has not scored as high in the review scores as I expected it would before viewing it. The scores are based on further discussion with my husband after watching the movie, in order to give it a fair review, as unfortunately if based on just my own thoughts it would have scored a lot lower and this did not seem right or fair. I love Batman, he is my favorite superhero with Superman being my next favorite, so I was really looking forward to watching this.

Unfortunately for me, I got lost relatively early on in the movie, and struggled to understand why Batman and Superman were not on the same side, and why on earth did they need to be fighting each other anyway. You know, the stereotypical girl way of thinking sometimes. Too many questions and over analyzing, and not enough just taking it for what it is haha And I also had mixed feelings about the Bat suit haha To me it seemed more mechanical looking, and much to heavy to allow for good movement. I much preferred some of the earlier bat suits, such as those in 1989, 1995 and 1997. Supermans was of course stock standard. I did however love Wonder Womans a lot!

The story line, as my husband said, was at times a bit hard to keep following, and sometimes you really had to pay attention to fully understand what was happening, or the reasoning behind a scene. I really struggled with getting into the movie for the first half, but then about 3/4s of the way through I began enjoying it more. I found I was more interested in why Wonder woman and some of the other Avengers were being mentioned. I did like that Wonder Woman was in it, but was annoyed that no one else joined.

The special effects, while I thought they were pretty amazing, hubby said there was a little room for improvement. He felt like some of the scenes effects were really well done, while others could have used a bit more work. There were moments he said, that he wanted to go back and check as he thought that there was obvious errors within the scene, and parts where no matter what, even a superhero couldn't pull that off haha

All in all it was okay. Not amazing though. I did enjoy the ending as I absolutely did not see that coming, but again I was also annoyed at the ending. I mean it made sense why it happened, but still annoyed me that it did lol Very frustrating! If you are a movie buff and right into superheros, DC etc then you might understand this a little more than I. Maybe if I watch it again I may appreciate it more.