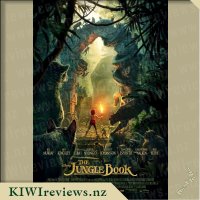 An orphan boy is raised in the jungle with the help of a pack of wolves, a bear, and a black panther.

I'd seen the trailer a few times with my kids, Mr 8 and Miss 6 particularly keen on watching it each time it was scrolled past on YouTube (woe to me should I skip it) and as such were rather excited when we got to go and see it. I knew going in that it was all CGI and did notice a few little rough edges at the start but that was quickly brushed away by the wonderful scenery and shots. The young lad playing Mowgli did such a fantastic job of working with pretty much nothing and was believable in all he did. All the voice actors were well chosen and fitted the animal they portrayed well, I could easily see them in that role, so great casting there.

My kids were entranced throughout the film, Miss 6 did shriek once and Mr 8 did jump a couple of times but the only one who really got scared was Miss 5 and that was only in the final fight scene which was fair enough. One thing that hooked me in the trailer was the new version of Bear Necessities, however I was disappointed that there wasn't much of it in the film, though it does appear they only made a short new version, I would have loved more of the song. I think Walken did a great version of 'I wanna be like you', suited his voice well.

The kids had a blast and really enjoyed themselves, I loved the scenery and it looked cab on the big screen, here's hoping it looks as food on the small screen. A great update to a classic.

The movie starts off with Mowgli (Neel Sethi) doing his wolf training with his "brothers" and being caught and reprimanded by the wise panther Bagheera (voiced by Ben Kingsley) for using his human tricks. This gives you an immediate taste for the beautiful scenery the animators have created to make it feel like it's really in a jungle.

The dry season comes and all the animals, predators and prey alike, gather together for a "water truce" which is where we get our first look at the tiger Shere Khan (Idris Elba) and the disfigurement which was given to him by human's "Red Flower" (aka fire). He demands that Mowgli be handed over to him. After much debating within the wolf pack Mowgli decides to leave and goes off with Bagheera in search of the human village. Along the way Shere Khan intercepts and Mowgli gets separated and heads off into the jungle alone.

While walking through the jungle Mowgli stumbles across Kaa the snake (voiced by Scarlett Johansson), I thought this was done exceptionally well and gave a much needed feminine voice to a predominantly male cast although her role seemed to be more about giving the back story than anything else. A lazy, manipulative bear named Baloo (voiced by Bill Murray) arrives and here is where the original Disney plot continues.

Watching this movie you could be forgiven for thinking it was shot in a jungle or even outside but this movie was actually shot in a Los Angeles warehouse and everything you see is CGI, apart from the "man cub" Mowgli who is the only human character in the whole movie. The two favourite songs from the original Disney classic, "Bare Necessities" and "I Wanna Be Like You," both appear but I feel they were done half heartedly and they should have either embraced the songs and made them pop or not bothered with them at all.

The animators need a major pat on the back (or a large pay check) for their work in creating the masterpiece that was the jungle and the animals. Each different animal, all the way down to the porcupine were seriously convincing from their body movements to their mouths moving when they speak.

Overall, I really enjoyed this movie but I wouldn't exactly call it a children's film, it's much darker than it's animated counterpart and has many adult themes that would be too much for a young child. This isn't necessarily a bad thing because most children who grew up watching the original will be at an age now to appreciate being able to watch the new movie but they may struggle to get their younger kids involved and love it as much as they did.

With even more action, excitement and rescues, Fireman Sam proves he really is the 'Hero Next Door' in this collection of the best episodes from the series. Whether it's stopping a runaway train, saving a boat full of passengers stranded at sea or rescuing Norman Price (again), Sam, Penny, Elvis and Station Officer Steele are ready, ... more...