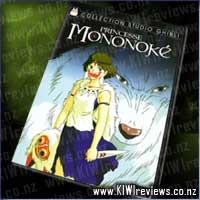 The march of technology, embodied in the dark iron forges of the ambitious Tatara clan, threatens the natural forces explicit in the benevolent Great God of the Forest and the wide-eyed, spectral spirits he protects.

When Ashitaka, a young warrior from a remote, and endangered, village clan, kills a ravenous, boar-like monster, he discovers the beast is in fact an infectious demon god, transformed by human anger. Inflicted with its deadly curse, a young warrior sets out to the forests of the west in search of the cure that will save his life.

Once there, he becomes inextricably entangled in a bitter battle that matches Lady Eboshi and a proud clan of humans against the forests animal gods, who are led by the brave Princess Mononoke, a young woman raised by wolves.

This was a must see again for my husband and so after much searching we watched it recently.

It is set in an imaginary time which blends the time of the ancient gods (Shinto style, gods of place and nature) with the settlement of humans and the coming of metalworking and war. The world is not in balance, and a distant conflict between industry and nature has wounded one of the gods of the forest, which is then killed by a sentry boy as it rampages into farmland he guards. The evil controlling it transfers to him, beginning a slow takeover, and he must journey to the origin of the conflict to find a way to cure himself and incidentally, as he will learn, to try to restore balance.

The story is not easy to understand. It has many Japanese mythic elements but even then, it is a work of Miyazake's unique imagination, and is not intended to be simple or to have a clean resolution.
The animation is spectacular, and unusual. There are at least half a dozen well developed characters threaded through the story, and their animation is wonderful in displaying subtle character. The original Japanese soundtrack has some amazing singing and draws upon some of the best talent available for voices - in Japan, Miyazake is universally known and this was a masterpiece carefully crafted. Japanese television documented a lot of the production. The English translation drew on some good talent but they seem not to have "gotten it" quite so intensely as the Japanese crew.

If you haven't seen Miyazake, give it a try.

Princess Mononoke is a story of man's technology and development against nature. At times the storyline becomes somewhat diffuse and hard to follow. Overall, we get there in the end with a satisfactory conclusion.

It is an extremely intense and complex story and definitely not for very young children. Interestingly, the NZ classification is PG on grounds of violence, but it was the visual depiction of the boar-like 'demon-god' that got me. I don't especially recall noticing the violence in particular, maybe I was too intently concentrating on trying to follow the story. But I did find the visual impression of the demon-god to be quite deeply and lastingly disturbing, it was REALLY graphic and creepy - I very quickly didn't want to look at it. Fortunately it doesn't occupy too much of the movie real-estate, but more than enough for me.

Overall, the fundamental idea that we need to live in harmony with nature may be valid. And from the perspective of the skill and craft of Anime production this one delivers, although it is not one I would personally watch again.

It begins with no clear warning. It seems to come out of nowhere. In a matter of minutes, episodes of strange, chilling deaths that defy reason and boggle the mind in their shocking destructiveness, erupt in major American cities. What is causing this sudden, total breakdown of human behaviour? Is it some kind of new terrorist attack, an experiment ... more...