« How to Train Your Dragon review 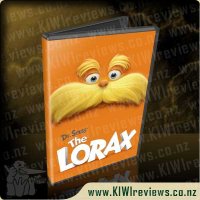 A 12-year-old boy searches for the one thing that will enable him to win the affection of the girl of his dreams. To find it he must discover the story of the Lorax, the grumpy yet charming creature who fights to protect his world.

When the Lorax hit the big screen, I took my daughter along to see it. I had been looking forward to seeing this on the big screen but had only really seen the posters. I don't have any recollection of having read this book as a child so the whole storyline was new to me. This movie consists of computer generated characters, voiced by several big names. The Lorax is voiced by Danny Devito, who does a great job. The gruffiness of his voice suits the character down to the ground and he has the ability to soften as needed.

Other stars voicing characters are Zac Efron and Taylor Swift, and perhaps most memorable Betty White. White makes a hilarious Grammy, with sass and wit as always. The graphics in the movie are like stepping into a Dr Seuss book. Its amazing to see the fluffy trees and how they move in the wind. On the big screen you feel like you are so close to the the animals, the dancing fish and bears and the exotic looking birds. My daughter was captivated by the characters and the major theme in the movie, which is all about the environment. I also enjoyed all the singing and dancing, but then I love a musical.

After watching this movie, my daughter was keen to go to a garden centre to buy trees. We were able to talk about pollution and making good choices for the planet too. I like that the movie was really watchable, taught my daughter something and opened up that dialogue with her. Since seeing it on the big screen, we have gotten it for our home and she watches it quite often.

This is an adaptation of one of the wonderful Dr Seuss books, The Lorax, with a bit of 'flesh' added to it for a feature length movie. You have a young boy living at home with his mum and grandmother, and he's fallen for the girl next door. Because of the effects of the Once Ler there is no nature in Ted's world, and so when the girl of his dreams says that she wishes for a real tree he sets off on a quest to find her a tree for her birthday. Along the way his plans are thwarted by Aloysius O'Hare who sells clean oxygen to the people of Thneedville.

The movie takes turns switching between Ted and his quest to find a tree, and the Once Ler as he tells his story to Ted. There are some fun musical parts throughout the film ranging between both the past and the present. The added story of Ted was done well and added well to enlarging the film as a whole.

The movie, just as the book, still tells a good story about how if you get rid of all the good things in nature, trees etc, it sends things on a downward spiral. But there is always hope to fix things.

"Unless someone like you cares a whole awful lot, nothing is going to get better. It's not."

Score: 8.2
Product reviews for listing 40: Pirates of the Caribbean -  Directed by Gore Verbinski