« How I Met Your Mother: Season Five review 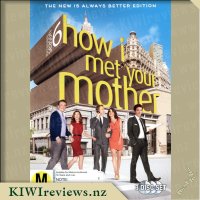 How I Met Your Mother: Season Six product reviews

After not enjoying the last season too much I was hoping that season six would bring back the zing that I like about this show and provide me with a good reason to keep on watching the show, and... it has, not by huge leaps and bounds but I did laugh more this season than last. Ted gets yet another girlfriend, though things are complicated to begin with, Barney beds more women and finds out something about his family, Robin is still working things out and Lily and Marshall work on starting their family.

This season features a big loss for one of our main five characters which is dealt with a good amount of both comedy and drama, it's not just brushed aside in favor of laughs or getting past it quickly which is good. We also finally meet Barney's father, which again, is dealt with well, adding in the comedy that we expect but also the drama for when things don't go as Barney expected or hoped. I was more than happy to sit down and watch several episodes in a row at a time and it hasn't taken me long to get through season six at all, I am rather looking forward to season seven.

Get ready for more thrills, spills and mayhem as television's most daring trio Jeremy Clarkson, Richard Hammond and James May - plus the mysterious Stig return for the 15th series of the world's biggest car show Top Gear.
In the first episode, Jeremy asks why there aren't more three wheeled cars in the world and investigates further with a closer look at the 1980s comedians' favourite, the Reliant Robin. Meanwhile, James gives Top Gear's ... more...