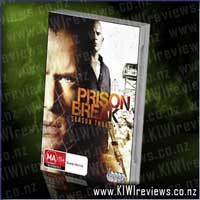 Disclosure StatementFULL DISCLOSURE: A number of units of this product have, at some time, been supplied to KIWIreviews by the company for the purposes of unbiased, independent reviews. No fee was accepted by KIWIreviews or the reviewers themselves - these are genuine, unpaid consumer reviews.
Available:
December 2008

Packed with intense action and white-knuckle plot twists, Season Three is Prison Break's most explosive yet, and this time, there's no way out.

Breaking out of maximum security at Fox River was the easy part. Now, Michael Scofield (Wentworth Miller) must fight to survive inside Sona, a hellish Panamanian prison where the only rule is brutal violence and the only way out is in a body bag.

So, with time running out, Lincoln Burrows (Dominic Purcell) scrambles desperately to free his brother along with the only man who can deliver Lincoln's captive son from the sinister clutches of The Company.

Probably one of the best TV series I have come across in the last 5 years. This has action, drama, intrigue, suspence and everything else that makes for gripping viewing. Though my husband doesnt really like it himself, claiming it as "too much hunk and not enough bang" he is a hard one to please at the best of times. Other friends I have spoken to, including his male mates, have agreed that it has plenty 'bang' in it for any viewer's tastes.
Wentworth Millar does a brilliant job yet again and it has been great watching his character grow and evolve across all three seasons so far.
With the sad news that season 4 will be the end of this franchise, it will be very interesting to see how they wrap it up.
For those who enjoy something a little more meaty than Shortland Street, but arent into the rough diamond of the modern James Bond, this is a great option for you. It even stands alone pretty well, though some of the dynamics between characters will be lost on you if you dont have the background gained from seasons one and two.

Meet Jamie, 16, and Laura, 18. They are two teenagers who - after one too many drinks, some deceptive party lighting and an available bedroom - find they have one very big complication on their hands. Laura (Scarlett Alice Johnson - Adulthood) is pregnant. Only problem is, she's meant to be heading off to university and Jamie (Sean Michael Verey - Skins) is way too young to be considering raising a kid.