ProdID: 2709 - The Worst Week of My Life - The Complete Collection
Type of Show: Comedy Series 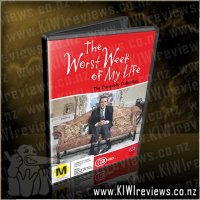 The Worst Week of My Life - The Complete Collection product reviews

Series One: The week before a wedding can be stressful at the best of times, but as Howard Steel prepares to marry Mel, it becomes a nightmare.

Series Two: Having finally made it down the aisle, it seems as if everything is finally going well for Howard. They are about to move into a new home, and are expecting their first child. If only life was this simple!

The Worst Christmas of my Life: Howard and Mel are looking forward to their first Christmas as a family. However, circumstances conspire to make this a Christmas to remember for all the wrong reasons.

It is no secret that I am a fan of English comedies - I have reviewed enough of them for regular readers on KIWIreviews to know I have a natural bias towards English comedies and yet one more onto my review pile is never a chore and every time a pleasure.

The Worst Week of my Life was not one I had seen much before. I think out of the total series I had only ever seen one episode previously, but they were either on at an odd time or I forgot what time it was on or simply just missed them. So to have the pleasure of reviewing this, well, it was a pleasure.

Unlike many comedy series, it is sans canned laughter track to remind you when to laugh, and yet the situational humour inherent in each episode is enough to have you laughing loudly. Some would perhaps describe this as slapstick, but if it is slapstick, it is intelligent slapstick - not American style.

Having said that, there is plenty typical English word-play to enhance the whole effect.

The actors are excellent and they play their parts well, Alison Steadman and Geoffrey Whitehead play the parts of the scary in-laws to Howard Steel (played by Ben Miller) that they so remind me of meeting my in-laws (though I do have to say that my in-laws are not frightening); but as anyone who has had to meet their partner's parents they will know how uneasy things can be initially. In the case of "The Worst Week of my Life" this nervous fear of the in-laws and Murphy's law is played out to excellent effect.

The show is highly funny, and there are some real belly laughs to be had. Laughing out loud is guaranteed (my wife and daughter certainly did). With Christmas coming up, this is a highly recommended addition to a loved-one's Christmas stocking.

Aeon Flux, the sexy secret agent extraordinaire that took MTV by storm is back, on DVD!

Follow the deftly skilled Aeon on her adventures through a futuristic world brimming with chaos and corruption. Experience every gripping episode of this cutting edge animated series like never before, as each episode has been digitally restored and has been bolstered with a 5.1 Dolby Digital Surround Sound audio track. Every aspect in the ... more...