ProdID: 2207 - Out of Africa
Performed by Loritz Circus 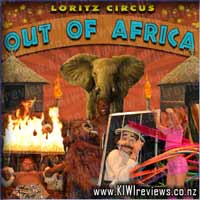 Out of Africa product reviews

Enter the big top and journey through the wonderful world of africa.

For the first time ever in New Zealand the Royal Kenyan Acrobats will perform breathtaking feats. Watch in amazement as artistes astound you with juggling, human pyramids and enchanting aerial acts.

This is an exciting new circus with thrilling world class acts, including Jumbo the giant african elephant.

Compelling entertainment for the whole family. Don't miss this once in a lifetime spectacular.

See the website and your local papers for performances.

Well first of all we watched this show in a small town in New South Wales called Cobar. The show came all the way out to us. I walked the kids down and didn't think much of it at first, we got some good seats and could see the whole stage we weren't in the front but 4 rows back. We took our own food cause there was nothing my Gluten Free child could eat there. The kids were 3 and 2 at the time.

What I really loved about this circus which was different from others that I have been to was that it had a storyline to it, they worked around a missing girl. The only animals we had was ponies but the kids got to touch the ponies before and after the show. The acts were amazing and worth watching.

My 3 year old went home trying to do the acts and a very excited little girl indeed. I would go back for another watch, once my 2 year old is a little older and able to sit and watch.

Overall it was a great experience and very different.

This goes to show first opinions can be very deceiving.

I have only ever seen a circus on TV or in the movies, and they were huge and very glamorous!

This on the other hand was not. A small ring and seating poorly arranged, so if a taller person sat in front, you could hardly see.

But when the show started it just blew me away! I realised with the opening act, The Royal Kenyan Acrobats, that you didn't need a big space to do an amazing performance! They were jumping and whooping and basically bending every which way. It was a fantastic sight, captivating the audience every second!
Later on they moved to the Limbo! with an obvious twist, it was on fire. Jumping over and bending under, (and the odd accident of lighting 1 loin cloth on fire). Then came the fire rings (these boys do love their fire), over, through, backwards and forwards, over and under and sometimes two at a time. A great sight, and definitely nail biting with anticipation!

Americus, the amazing Hula Hoop girl (7 years old) definitely lived up to that title, she was an amazing cutie, doing tricks like it was just (pardon the pun) child's play.

They also have a few awesome displays of acrobats, with gorgeous girls balancing on bicycles (on a podium). And they are joined by a talented man for the ribbons, up and down, round and round. Two at a time on several occasions, where only one was holding on to the ribbons! I don't want to give it all away, but all I can really say is WOW!

The ponies were cute as a button! doing cute little tricks for treats from the pocket of a clown :) You just wanted to snaffle them up and take them home with you.

Jumbo made a very brief appearance, and took a bow, she seemed very friendly, and was much bigger than I imagined. Although it was a bit late and she looked a bit tired, probably to do with her age, she was very comfortable in her surroundings, and didn't at all seem fazed by the people.

Last but not least the clowns...making appearances throughout the show, with paintings and lemon tricks involving the audience, they were bundles of fun, you couldn't stop laughing when they were in the ring!

The last act was almost bringing me to tears from laughing so hard..."the battle of the wills" it could be called, with 1 wanting the other to clean up, and the other just wanting to have fun!

All I can say is I would definitely go back, and I would recommend to all (Yes even if you don't have a child to take...go by yourself!) you will not regret it, and you will laugh yourself hoarse and clap till your hands are sore!

For an hour and a half's entertainment, you just cant afford to not go!

This Circus is absolutely amazing!!!! When i first entered the great big tent i actually felt quite disappointed with the size of the performing area, to me it seemed rather small, but boy was i wrong!

Once the Circus began, my jaw dropped. It was brilliant! Absolutely brilliant. The Royal Kenyan Acrobats had to be my favourite, from doing really wild choreographed dances, to doing a fire limbo and jumping through fiery rings. One of the acrobats had his bum catch alight too, but he didn't flinch as if it was all part of the performance.

It took me a LONG time to come to the conclusion of my favourite part of the show, as it was all fantastic! Other performances included the Hula Hooping girl - so gorgeous!, a walk on appearance from Jumbo the Elephant, ponies, clowns and many more acts.

The only slightly negative thing about the show was the seating. Even though i was in the elevated seating it wasn't positioned very well as you had to keep moving your head around the person in front of you.

Also on website, and as well as being stated before the show and at intermission, people are told not to take photo's or videos, and yet i still found myself telling the woman in front of me to sit back and put it away so my daughter and i could see. I feel there needs to be someone watching the audience to keep everyone in check as it is a safety risk to the performers.

There is a great music soundtrack for this show. All the songs were upbeat and catchy.

All in all, i am going back again before the Circus leaves town, and i will be getting an autographed photo with as many performers as i can. I can't rave about this show enough, stop reading the review and go and see it for yourself! You wont be disappointed!!!

Oh and my 3 yr old daughter couldn't stop raving about Jumbo the Elephant and the Ponies, as we were leaving she was complaining about sore hands from clapping so much, and yes i had sore hands too!!

AN ABSOLUTE PLEASURE TO GO AND SEE, DON'T MISS OUT - GET YOUR TICKETS NOW!!!!

Winner of the Best Drama Series award at the 2010 BAFTA Television awards, Misfits is a bold comedy drama based on a script by Howard Overman (Hustle, Merlin and Spooks: Code 9), that subverts the superhero genre with a knowing take on how hard it is to be a hero in the modern, cynical world.

When five teenage outsiders on community service get struck by a flash storm they end up with special powers. Hard-as-nails Kelly can suddenly ... more...