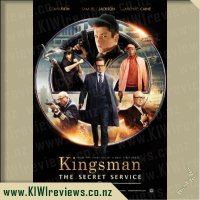 This film I watched with no expectations, and came out very pleasantly surprised. Although a lot of the spy orientated films are riddled with cliches, this one still proved highly entertaining. Samuel L Jackson plays a great role in this film, and is somewhat different to his other roles. The humour is well placed and the fight scenes are well orchestrated leaving you wanting to see more. The main character played by Taron Egerton is introduced well in the film and you get a real sense of who he is and why he is they way he is.

Colin Firth delivers a wonderful performance as do Michael Caine and Mark Strong. Although the main storyline can be a bit predictable, the quirks, special effects and well played roles definitely keep you wanting more. The master evil plan is believable and well applied.

This film is stylish and is for those who like an action film with humour, good special effects, stylized action scenes, a relatable main character with solid back ground information, and a great wardrobe. Kingsman: The Secret Service is a definite nod to spy movies from the past. Highly recommended for all who love well appointed comedy in action films. This felt like a modern return of the Pierce Brosnan-style James "Bond" Films. The idea of a rich spy agency that enjoy their suits, gadgets, and doing things with a manner of dignity. Watching this film, it is easy to see the film is targeted at the teenage male demographic, with the main protagonists being male, and the use of dirty acts with attractive females as "rewards" (that's really as much detail as I can go into).

But ignoring the controversial stuff, this film does do well to pay homage to the "Bond" films. It makes use of the usual cliches, and tries to push the envelope with every single one. The film went largely as was expected, with few real surprises, until you discover the plan of the villain (which I found quite surprisingly ambitious, but not overall deluded or convoluted. The expected result would in fact do what it aimed to do).

I enjoyed the fight scenes, which felt like a slightly faster, yet more eloquent fighting style to that of Jason Statham's in the "Transporter" franchise. But most importantly it was a fun movie. It was a light-hearted comedy with generous amounts of action. A good, fun film (even if a little bit dirty)

After a young boy's school essay erroneously finds its way into the hands of a Hollywood producer who turns the idea into a hit film, the boy travels to Los Angeles to claim his credit.