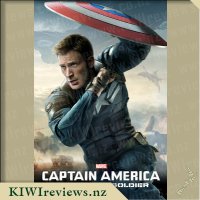 After the cataclysmic events in New York with his fellow Avengers, Steve Rogers, aka Captain America (Chris Evans), lives in the nation's capital as he tries to adjust to modern times. An attack on a S.H.I.E.L.D. colleague throws Rogers into a web of intrigue that places the whole world at risk. Joining forces with the Black Widow (Scarlett Johansson) and a new ally, the Falcon, Rogers struggles to expose an ever-widening conspiracy, but he and his team soon come up against an unexpected enemy.

This is probably one of my favourite Marvel Cinematic Universe (MCU) films. Possibly because the villain isn't some weird overpowered computer generated creature, but instead is something believable. You could almost say that it is a scenario that could be seen to happen in the future. So it's something that strikes a chord with the viewer.

This film also didn't have heaps and heaps of superheros in it, so it wasn't drowning in major characters (unlike Avengers), and was well balanced. The plot was one of the most pivotal for the MCU due to the involvement of S.H.I.E.L.D., and unlike the other Marvel movies that only get an occasional mention or cameo in the TV show, this film completely changed the direction of the show in a way that makes absolutely no sense unless you have seen the film.

I found this was the first film where Black Widow got a real chance to show her capabilities. And she shone! She worked well together with Captain America and the friction between various characters, felt genuine. That being said, my favourite character was the Winter Soldier (played by Sebastian Stan); the man said barely a word in the film, and yet he had a very strong character personality, and his fight scenes were superb (go knife fights!)

This film has a great balance of storyline and action, and doesn't really feel the need to go much into the comedy factor, which gave the film a great "serious" vibe. Definitely a must watch.

After having visions of a member of her support group who killed herself, a woman (Jennifer Aniston) who also suffers with chronic pain seeks out the widower (Sam Worthington) of the suicide.