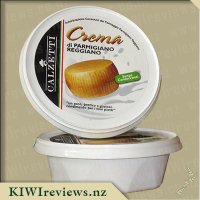 Disclosure StatementFULL DISCLOSURE: A number of units of this product have, at some time, been supplied to KIWIreviews by the company for the purposes of unbiased, independent reviews. No fee was accepted by KIWIreviews or the reviewers themselves - these are genuine, unpaid consumer reviews.
Available:
via Online Store

Delicate, subtle, elusive, but definitely there... that would be the best way I can describe this cheese. I wanted to try it somehow different, and after doing a lasagne the night before, I wasn't too keen on going through all the effort of making up another batch. So, trying to "think kiwi" I went for cheese toasties.

Now, cream cheese is not going to survive well in the manner I do cheese toasties - my preferred method is to make the sandwiches buttered inside and out, and then fry-toast them in the non-stick frying pan. A very liquid cheese is going to leak out almost the moment heat hits it. So, for this I chose a really mild cheddar cheese and grated it very finely. Into that I mixed the cream cheese and combined them well, until a thick cheese paste spread formed. Into the sandwiches it went, and then the pan.

After a few minutes on a medium-low heat, the bread was delicately browned - not as much as I would usually have it though - and the cheese was just starting to make a break for it out the sides. A gave it a bit of time to let it cool a little then tucked in... amazing! The cheddar was detectable, enough to let me know it was there but not enough to drown out the delicate hints of parmigiano sneaking through. This was a really nice combo for me, and I thought I could play with it a bit.

For the second batch of toasties, I added a pinch or two of dried basil and some thinly sliced tomato. This combo was even tastier, though it was a little light on the parmigiano flavour by this stage, mainly due to the basil. A third batch with the last of the cheese spread and just tomato was nice, but not as good as either of the first two - in some way I think the tomato diluted the cheese flavours too much.

Overall, a really nice cheese and one certainly worth considering if you want to make a special dip, or to experiment with... if you budget stretches to such things. Because I am not a fan of the texture of cream cheese on its own, this is not an aspect I explored, but I know other reviewers did so I leave that judgement to them, and you.

After trying the Crema di Gorgonzola DOP cheese in the same range as the Crema di Parmigaiano Reggiano, I had high expectations of what I would find when I opened the pot. I tried a bit on a spoon to start with and I found that it was much thicker in texture. My first thought was to compare it to the highly processed cheese I have tried from the supermarket (it comes in a glass jar). Looking at the ingredients, however, they are simple and don't contain the rubbish that is in the cheese I was comparing it to. It wasn't in the same league as the Crema di Gorgonzola. I had to stop comparing the two and look at it as a totally different product. With the thickness of the product in mind, I think that it would be best suited to serving it on top of something warm so that it melts or as a spread on a sandwich.

Tonight I served a dollop of the cheese on a baked potato. The family enjoyed it but everyone (including the kids) kept comparing it back to the Crema di Gorgonzola. It did work very well on the baked potato as it melted nicely and you could see that there was cheese in it as it had delicate strings of cheese forming as it melted and I picked up a mouthful to eat. The taste of the cheese was very mild and didn't stand out in a great way with the potato. I found that it actually worked better mixed in with the vegetables I had on my plate.

After dinner, when I sat down to write my review, I grabbed the container out again so that I could remind myself of the flavour. The first thing I noted was that holes created in the product where I had taken some cheese out during dinner had disappeared and the cheese had settled back into a smooth surface. There were no signs of where I had taken the cheese from. This was interesting and it meant that the cheese looked new again! Of course, the level of the cheese had reduced.

In my after dinner testing stage, I found that the cheese seemed to have more flavour than it did when we consumed it with dinner. I am thinking that the flavour had been overpowered by the rest of the dinner (even though it was a pretty plain meal). The simple crackers I tried it with this time worked well as the cheese had a chance to shine a bit more.

Overall, this cheese as ok but nothing to write home about. It definitely had trouble living up to the experience I had with the Crema di Gorgonzola DOP. Maybe I was excessively spoiled by trying that one first!

I was lucky enough to get a sample of the Cream of Parmigiano Reggiano Cheese to try through KIWIreviews. It had been sitting in my fridge for the past few days while I tried to decide what I was going to use it for. After giving it a little taste test I decided that it reminded me of processed cheese slices, with a taste and texture that was also similar to the cheese dip in a Le Snak or the cheese spread that you find down the breakfast and spreads isle at the supermarket, but with a much stronger taste of parmesan cheese and a silky smooth texture somewhere between a cream and a sauce, which I guess really isn't really surprising as the packaging says it is a processed cheese product

I had taken chicken out of the freezer to have for dinner and decided to use the Cream of Parmigiano Reggiano Cheese to stuff the chicken along with some smokey bacon and baby spinach. I chopped the bacon and spinach up finely and then mixed the two ingredients with the cheese and then stuffed the mixture inside the chicken which I then crumbed in a mixture of fine and panko breadcrumbs and placed it in the oven to bake. 40 minutes later the chicken was cooked and ready to try once I had dished it up with some roast potatoes and a green salad. The cheese filling seemed to complement the chicken well, and made a good combination with the bacon and spinach. It didn't melt completely when cooked, it stayed just the right consistency.

I still had just under half a package of the cheese left so decided to quickly cook up some pasta for lunch tomorrow and stirred the remainder of the cheese into it to make a cheesy pasta, I had a quick taste and the cheese does seem to be quite strong tasting without any other flavorsome ingredients to go with it, so I don't know that I would do this again - you can't beat the classic mac and cheese recipe, though this was a lot quicker and easier I must admit.

The cheese would probably also be great for a quick cheese on toast or as a change to the normal cheeses that you would serve on a cheese board. Though I'm not sure if I would purchase this again myself it was definitely a product that was well worth trying.

A delicious nutty blend of 10 fresh herbs, spices and nuts including premium hazelnuts, roasted sesame seeds including coriander and cumin.