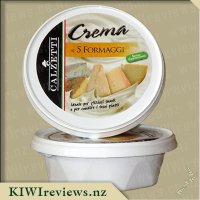 Disclosure StatementFULL DISCLOSURE: A number of units of this product have, at some time, been supplied to KIWIreviews by the company for the purposes of unbiased, independent reviews. No fee was accepted by KIWIreviews or the reviewers themselves - these are genuine, unpaid consumer reviews.
Available:
via Online Store

Chocolates Are Us - Ginger Brittle
Rating: 9.4

I got to try the Crema ai 5 Formaggi recently. The first thing I noticed about this product was the packaging. The container was smaller than I thought it would be, given the price. The lid and the safety foil seal were relatively easy to get into. As far as the packaging and branding on the container, they have stuck with a white pottle. But the unusual shaping I think would stand out against other similar products on the supermarket shelf. The fonts and image on the lid, are clean and clearly show what you should expect in terms of cheeses.

The first thing I did with this was to have some with crackers. I offered some to my children and I had a couple myself. The flavour of this product is very bold. As such, my children did not enjoy the crackers and I was left with the remainder. I could taste a lot of complexity and had a good go at trying to determine each cheese in the mix. I definitely thought I tasted a blue cheese in there as well. This is what I would call a sophisticated flavour. I can imagine it as part of a cheese board at an upper market party.

The next thing I did with this product, was use it as the main base for a cheese sauce in our normal macaroni cheese meal. Usually I use Edam which is a more subtle cheese flavour. My kids are not always the most adventurous with their palates and bland suits them fine with this meal. So it interested me to know if using this cream of five cheeses would be acceptable, or if it would ruin the meal for them. I'm pleased to say that it was declared delicious and seconds were requested. They said that the stronger cheesy taste was very nice. So I think for them cutting it into a white sauce was the key.

My husband said it was one of my best macaroni cheeses as well. He often adds lots of pepper and hot sauce to his portion, because he doesn't like bland food. So as a meal additive it was a winner for us, but as a cream for dipping crackers not so much. The consistency as well was a little more like a creamy dip than a cream cheese, which wasn't an issue but it was different to what I was expecting.

Soft cheeses are something I have heard a lot of good things about, but frankly the texture puts me off. However, I can quite happily use it in other things, such as cheesecakes and stirred through other foodstuffs such as mashed potato etc. So, I figured "What the hey..." and decided to try it in lasagne.

Using it in the cheese sauce was an obvious option, and while I am loathe to take the easy road on such things, I went with it this time. Glad I did, as the rest of the lasagne turned out just right and I would have been devastated to have risked it. As it was, the cheese sauce turned out to be far better than I feared, and almost as good as I hoped.

I won't go into the details of the lasagne itself - pretty standard recipe and methodology really - but I will point out that I made it in three layers, instead of the usual two, by spreading the mince and cheese sauce out a little thinner. It was a bold move, for me at least, but it provided me with a lasagne that held it's shape so much better than many previous attempts where I have 'jiggled' the recipe.

Eating the lasagne, I could immediately pick out three of the cheese flavours I am familiar with - Parmesan, Gorgonzola and Pecorino. These are cheeses I have experienced in the past and found to be pleasing to my taste buds.Thus, I was really happy to note them coming through quietly, but clearly, in the cheese sauce. The smooth and creamy texture of this cheese, the aspect that most displeases me when I try to eat this in any other way, enabled it to blend well with my special cheese sauce recipe without affecting its ability to be spread over the pasta during assembly.

Overall, while it's not a cheese I would consider buying at all often, mainly due to the price, I do think it's one I would recommend to friends I know who love their soft cheeses, and would indeed consider it if I was making lasagne for someone I really wanted to impress. Definitely one worth the effort to explore and experiment with if your budget allows for such treats.

When I was offered some cream cheese to review I thought I would give some a try. I had to ask Aunty Google what the different cheeses were as the only cream cheese I have ever used is the stuff you get from the supermarket and it was usually used to ice a carrot cake. The Crema Ai 5 Formaggi is a blend of 5 cheese and once I received the tub I needed to use an online translator to help me as it was all in Italian.

I had been told that the Calzetti cheeses were very good for using in cooking as the can handle heating well. I put this to the test by using half the tub in a cheese sauce. I confess to being a failure at making cheese sauce, usually as it is lumpy or curdles. The one I made with the Crema Ai 5 Formaggi was the best ever. It could have been served in a restaurant (although I sound boastful saying it). It was so smooth. I served it as a warm dip on a platter with hotdogs, fish bits, oven chips and kumara chips. It was a huge success with both my daughters (5 and 7 years old). I had been worried as the cheese was very strong blue flavour (although it might just be because I am not a huge blue fan) that it would be too much for the girls. I found that once it was added to the white sauce its flavour was milder and very enjoyable.

Yesterday I was having my usual homemade vegetable soup for lunch. I had over heated my mug so I thought I should add something to cool it down. Instead of the usual water or milk I stirred in a big dollop of the cheese. It mixed smoothly with the boiling soup. It also added a lovely flavour to the soup which I had been getting a bit bored with.

The last of the cheese I spread onto a pizza base. I didn't have enough left to put on all the pizza bases for the families so gave the girls a choice of regular or extra cheesy pizza. Both girls chose the extra cheesy one and loved it. The cheese although it appears really runny spread easily with the knife.

I have really enjoyed this cheese. It is a premium product so it is not something I can afford to have in my fridge all the time. It is something that has to be purchased online so when I do I will be getting one or two other varieties to try too.