« Chronicle of the Fallers 1 - The Abyss Beyond Dreams review 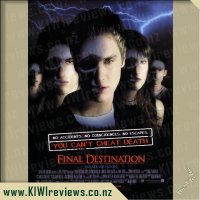 Death is coming and Alex Browning is blessed with the curse of knowing when, how and where the grim reaper will strike.

Alex's bone chilling gift reveals itself just as he embarks on a trip to Paris with his high school French class. In the plane's cabin, buckled-in and ready for take-off, Alex experiences his first powerful premonition. He sees the plane explode in a fiery blaze moments after leaving the ground. Sensing imminent doom, Alex panics and insists that everyone get off the plane. In the confusion that ensues, seven people including Alex are forced to disembark. Alex's horrific premonition proves tragically accurate and ultimately Alex comes to believe that somehow he and the others cheated death. One by one as each of these fugitives of fate meets an untimely end, Alex and his remaining friends must band together to change the course of destiny and outwit the untameable forces of death.Ali Larter
Devon Sawa

I saw this movie a few years ago when it first came out but I wasn't really into it and spent too much of the movie freaked out and not really paying attention as I was NOT a fan of horror movies, skip ahead a few years and whilst I am still not big on horror movies I am OK with them and they rarely make me jump anymore. Final Destination takes premonition and the idea that if you are meant to die you will, one way or another and pumps out the deaths. A group of high schoolers are on route to France when their plane explodes, though one dreams it and ends up leaving the plane along with a few others.

Death, it would seem, is not happy with this and sets off to find various ways to kill the cheaters of his game, whilst the various ways the Death fulfills this is inventive and quite crafty with a fair bit of thought put into it, it is rather like a game of Domino's, it just doesn't make sense as surely if Death wanted you dead you'd be dead, like, right away, not a few days, weeks etc. later. The deaths aren't too gory (when compared to the next, what is it, four? installments) and so this one relies on the suspense more than the deaths which I prefer in a movie anyway.

A good idea and not too bad a movie but not the most believable.

J discovers that there are secrets to the universe that K never told him - secrets ... more...