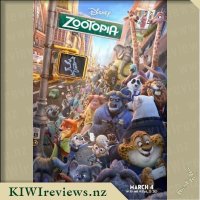 The modern mammal metropolis of Zootopia is a city like no other. Comprised of habitat neighborhood's like ritzy Sahara Square and frigid Tundratown, it's a melting pot where animals from every environment live together - a place where no matter what you are, from the biggest elephant to the smallest shrew, you can be anything.

I had been looking for an entertaining movie to take my 8 year old daughter and her friends to see and the Trailer to Zootopia was funny enough so I hoped this would fit the bill! Zootopia is a is a clever and heart-warming story set in a city where predator and prey live in harmony. Judy Hopps is a rabbit with dreams of becoming a police officer and as these positions inevitably go to larger predator animals, no one gives her much of a chance. Through sheer determination, she completes Police Academy and is assigned to a precinct in the heart of Zootopia. She teams up with Nick Wilde, a con artist fox and they embark on buddy cop adventure to solve a missing 'persons' case.

This is a fast paced, action packed movie with chases, kidnapping, threatened torture and a scene that made the whole cinema jump! The film has spectacular animation, in fact you often forget that the animals you are looking at are not real. The background visuals are stunning and the city of Zootopia looked like a fantastic place to live (if you were an animal!). Zootopia raises some important topics such as discrimination, bullying and stereotyping but in a humorous and entertaining way. There are some excellent characters and the voices are cast to perfection. There are lots of adult jokes (with references to The Godfather and Breaking Bad) that go well over the kids heads but still has plenty of jokes to keep them amused.

The whole family loved Zootopia and for the little ones, it really showed that courage and team work can help you succeed. My girls have asked for this movie on DVD so I know this is a film that will be enjoyed many times over.

Ever since I saw the teaser trailer featuring Flash, the sloth and his slow motion reaction to a joke, I have wanted to see Zootopia, a desire matched by my three children. Luckily I have a very generous friend who shouted me and the kids to the movies yesterday (she too having been hooked in by Flash) and there was no contest as to what we were going to go and see. We start off by getting a history lesson, not only in how the animals changed over time (no humans ever existed) but also a little history of Judy Hops, who will soon enough be the first rabbit cop.

The plot of the film is really well paced and manages to inject all that makes a good film into it, whilst also dealing with some very strong topics (such as bullying, assumptions based upon fear and perhaps even a hint of racism ie blaming the many for the actions of the few...? Rather relevant to todays world). Then we have Hops determination not to let her species stop her from reaching her dreams and Wildes acceptance of what people expect from his species to again breaking out of the mould. All the characters are done so wonderfully, each their own creature and well worth meeting. A few secrets are revealed along the way as Hops tries to solve the mystery and whilst I worked it out a few moments before our key characters all was revealed well.

The scenery is stunning, we move through a few different areas of Zootopia and they look wonderful, all I could think whilst the train ride into the city happened was that there are so many possibilities here that I wouldn't bother with a 2nd movie (though that would be fabulous) but a TV series, with different tundra the opportunities here are endless. Expect a few scares to happen, I admit I jumped in one scene, but there are plenty of moments for laughs and a few tears. And keep and eye and an ear out for nods to other films such as Frozen with a bootleg DVD (Flotsam 2) and the weasels complaint about the pronunciation of his name.

My kids enjoyed this so much that I already have them asking to go and see it again at the movies, wanting to take everyone they know. I thoroughly enjoyed Zootopia and can't wait to get it on DVD, and keep fingers crossed for a TV series.

I always look forward to Disney movies, they never fail to impress but every now and again they seem to pull one out of the box and then and that movie become a classic for the new generation. Zootopia I think is the 'lion king' or 'Frozen' of its generation, it is a brilliant movie, if you are planning on taking the whole family out to a movie that everyone will enjoy this is the one to see. It has a great mix of comedy, drama, and a little suspense. The lead and hero in this movie is a female bunny, she has dreams that everyone says she won't achieve. She works hard to prove everyone wrong, and she gets knocked down... but she gets back up again. The graphics are beautiful, there are several different cities within Zootopia, and each has been richly created. The Inhabitants of Zootopia are just as diverse and well presented, I found myself trying to scan the screen to see them all!

There is humour woven through the whole movie, for children, and then a more complex subtle humour woven through for adults. There is also an element of fun poked at stereo types, my favourite is Mr Big the crime boss! Through Mr Big there is the message that no good deed goes unrewarded, as an act of kindness that our heroine partook in saves her from being 'iced' at just the right moment! The biggest critic for any film is my husband, he hates sitting through any film unless it has lots of cars and action in it. I took him along too, (at his request after he had seen the shorts) he was captivated by this film, and I heard him laughing a few times too!

I noticed as I watched the film there were several toddlers, through to some grandparents all were captivated through out the film! The film leaves you with the feeling that you have been entertained, and that life is good and fun! Be warned though, that you will want to see this film again, it is one of those films that the first time you watched it you feel like you will have missed some of the detail as it is so rich and bursting with colour and character. I highly recommend it to all young and old, who want to spend a few hours in 'zootopia'.

Disney movies never fail to impress both the young and old and Zootopia is no different, with it's story based on a great adventure filled with lots of cute, cuddly and adorable animals throughout. Right from the start Zootopia covers a number of issues which people often face in everyday life, such as bullying, not being good enough, and giving up when something is too hard, however in the movie one of the main characters Judy (the rabbit) shows the importance of following your dreams and never giving up no matter what other people think or say and that you should always follow your dreams.

Zootopia is based on the life of a rabbit named Judy who has a dream of becoming a police officer. Judy comes from a quiet country village where she lives with her parents and more than 200 brothers and sisters, who are all expected to grow up and work on the families carrot farm, despite her parents wishes Judy sets off to fulfil her dreams and moves to the big city of New York to train and become the first rabbit to ever become a police officer in Zootopia "where different breeds of animals live together in peace and harmony". Judy faces many ups and downs on her journey with her parents, and even the police academy telling her to give up as a creature as small as her can not become a police officer. Once making it into the police force Judy gets assigned the role of meter maid, facing endless bullying and laughter from her workmates each day. However Judy soon meets Nick a sly and witty fox who she soon befriends and works alongside with to uncover one of Zootopia's biggest mysteries yet - the disappearance of Mr Otterton. It is here she convinces Nick to join the police force (his dream from a while back) and also where she gains approval and acceptance from her colleagues.

The graphics in the movie were beautifully done, with the animals all suiting their personalities perfectly, however being in 3D the backgrounds did seem to be very blurred and hard to focus on for too long, although I would say that this was to make the main focus on the characters. The movie has lots of moments of laughter but also lots of seriousness throughout due to the nature of the movie and the issues which it raises, which I am sure that most of the viewers can relate to from some point of time in their life.

This movie is all that you would expect from a Disney movie and even more, a story which has a happy ending and will likely be cherished and remembered by many generations. My 3 year old loved it as did I, and I can definitely recommend it as a worthwhile movie to go out and see, it is sure to delight and leave a smile on your face.

Illumination, who brought moviegoers Despicable Me, Despicable Me 2 and the biggest animated hit of 2015, Minions, continues the story of Gru, Lucy and their adorable daughters - Margo, Edith and Agnes - and the Minions in Despicable Me 3.

After he is fired from the Anti-Villain League for failing to take down the latest bad guy to threaten humanity, Gru finds himself in the midst of a major identity crisis. But when a mysterious ... more...