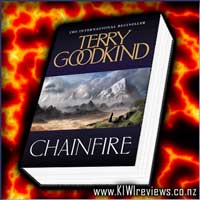 Richard observed the storm of activity swirling around him with an odd sense of detachment. Only the pain seemed real. he remembered hearing it once said that when you died, no matter how many people there were with you, you died alone. That's how he felt now - alone.

After being gravely injured in a battle, Richard awakes to discover Kahlan missing. To his disbelief, no one remembers the woman he is frantically trying to find. Worse, no one believes that she really exists, or that he was ever married. Alone as never before, he must find that woman he loves more than life itself... if she is even still alive. if she was ever even real.

As a fan of Terry Goodkind I was looking forward to the next stage in the saga of the D'Haran leader Richard Rahl and his friends and family, and I wasn't disappointed.

As always, there were interesting twists and turns in the story to make you wonder what was coming up next, but with enough realism to make it seem like these people could be real - they feel pain, they love, they empathise and they make mistakes.

Personally I probably would have waited for the paperback version of the book - I don't see the point in spending an extra $10 for a bigger book that's harder to hold.

But once I had it in my hands I just wanted to keep reading...
I may be strange, but I like all the detailed bits in the book, the explainations of the why's, wherefore, and how's of the day to day life in the Midlands, D'Hara and the Midlands make it all the more real to me, transporting me into the world where it's possible to remove a person from everyone's existence with a spell, and to travel the sliph and to be reborn from the dead.

As always Terry Goodkind makes his characters real and believable, with faults of their own as well as the good points and quirkiness that makes them lovable.

I did miss the input that Kahlan usually has to the story, and look forward to reading the next installment to find out just how Richand, Cara and Nicci get her off the Dark Sisters and repair the world again.

Twins Meg and Charlie are moving into their great-great-aunt's hotel, and they're in for some surprises! The rundown hotel is full of cool old rooms, a rooftop garden, and even an elevator. There's also one big problem - it doesn't have any guests.

But when Meg and Charlie volunteer to look after a neighbor's golden ... more...