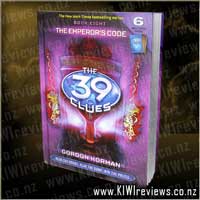 One belief has sustained 14-year old Amy Cahill and her younger brother, Dan, on their hunt for the 39 Clues: They are the good guys.

Then a shocking discovery about their parents shatters everything Amy and Dan think they know, dividing the two siblings for the first time ever.

When Dan disappears in a country of more than a billion people, Amy has to make a terrible choice - find the next Clue... or find her young brother.

As with my fellow reviewers I too feel that with each book not only are the books getting better but the series as a whole is maturing, almost like the way that Amy and Dan are being forced to mature through the course of these books.

It's when I'm reading these books that I wish I was able to go to half the locations that these two go to. Like for instance China which is where the clues take them this time on their worldwide jaunt, and once again there are no shortages of famous landmarks, historical characters or intriguing & twisting plotlines. Probably the biggest in this book is the mother of all dilemmas Amy is forced into when her brother Dan goes missing.

As with the rest of the series to date, it is not hard to be impressed by the high standard of writing or to give the book a perfect ten.

Planning a book is hard enough; planning a series is harder; but planning a series of books having been written by multiple authors is harder still, especially when one is aiming to make this series as seemless as possible so one book really does flow from one to the next.

The books picks up from where we left Amy and Dan in the last book, and with a whirlwind tour around China, then onto Tibet, with Dan being separated from Amy somewhere along the way, only to be reunited again - eventually. But what about Nellie? Without giving too much away, there is more to be discovered about Nellie. Who is she working for?

The pieces of the puzzle are there to be found, but keep a pen handy and write each part down as you go along, you don't want to miss any.

The 39 Clues has now gone through eight of it's fast paced books and is only two books away from coming to a close.

I thought that the cover was really cool because it had three hidden messages in it. It took me a while to find them, so that was the best part of this book. I found The Emperor's Code enjoyable mostly because it taught me a lot about ancient China, like the fact that during construction of the Great Wall, when a builder died his body was built into the wall itself!

I found this book different from the others so far as it was rather sad when Amy and Dan got separated after having an argument about their parents and their true identity, so I think that is my least favourite part. My favourite part of the story on the other hand was when Amy and Dan were going to the tallest mountain in the world, Mt Everest, to find the 8th clue.

The book code was one that was a bit tricky to decipher and I had to write it down on my bookmark to keep track of it, but I'm sure the next one will be easier. This book was very easy to get interested in, and the story was awesome as it was full of tricks, traps and adrenaline, so I have high hopes that book #9 will be just as good as this one.

This book series is hard to resist, so if you love puzzles, mysteries and action then this is just the book for you. See you on the hunt.

Oh my... I say it every time, but this was my favourite in the series thus far. The stakes just keep getting higher and higher and breaking Amy and Dan up in the impossible massiveness of China was certainly a heart pounding development.

I enjoyed the locations and history (from the Great Wall to the Shaolin Monk's temple) the people (like the Last Emperor of China) and the ever twisting story.

Something I really love about the 39 Clues is how much the characters develop as the books progress, especially the younger characters from each branch. People like Jonah, Ian and Hamilton started out so 'stereotyped' according to the branch they were born into, but with recent developments, I am beginning to develop a sneaky suspicion that the children will be the ones to save the day in the end, and that would be a beautiful ending. I am so excited to see what the final two books have in store. The 39 Clues well and truly deserves to be on the New York Times best seller list.

Great for children and parents alike, I whole heartedly recommend this story for its educational value, its positive representations of other cultures and its brilliant story.

This story just keeps getting better and better, book to book! Yes, an over-used, but in this case utterly deserved, truth. The places these kids get to visit is a globetrotters dreams, but the tiny amount of time they get to spend in each is a traveller's worst nightmare! What a waste to be in the heart of China and only be able to spend a scant few days running around lost and emotionally overwhelmed, with all that culture and beauty surrounding you. I couldn't bear it myself.

A couple of things I noticed that had me wondering why the sudden, late break in the pattern... for the 'hidden-clues hunters' forget about checking the page numbers... this time around, there's nothing there. The creators have come up with a new twist for you. Hint: When you see them, write them down so you won't forget by the end. (That will make sense to those who spot the first two. And yes, I *could* be more cryptic if I tried.

). Also, one coded and three hidden messages in the artwork on the inside front cover. If you are the sort who will sit through the closing credits at a movie, just to see if there's a cookie recipe hidden in there or something, then you'll find the decoding string easily enough. For the rest... time to look a little closer.

The three other messages are well hidden, so keep your peepers peeled.

Overall, without giving the whole plot away it's hard to say too much more. What I can say is that this is one rollercoaster of an instalment, with some character development that will surprise you. If you have stayed with Dan, Amy and Nellie this far, you won't want to miss the rest. My personal bet: Nellie's going to spring one doozy of a dropkick-punchline on them in the next book.

The disappearance of former handler and lover Megan Winslow strikes hard at Wade Hanna's soul. He tenaciously digs into covert operations and learns that Megan is in mortal danger.

The secret laboratory she has penetrated is conducting experiments on orphans to revive a Nazi effort to modify cell structures and turn innocent children into weaponised ... more...