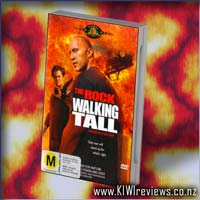 Dwayne 'The Rock' Johnson plays Chris Vaughn, a retired soldier who returns to his hometown to make a new life for himself, only to discover his wealthy high school rival, Jay Hamilton, has closed the once-prosperous lumber mill and turned the town's resources towards his own criminal gains.

The place Chris grew up is now overrun with crime, drugs, and violence. Enlisting the help of his old pal Ray Templeton (Johnny Knoxville), Chris gets elected sheriff and vows to shut down Hamilton's operations. His actions endanger his family and threaten his own life, but Chris refuses to back down until his hometown once again feels like home.

I really quite liked this movie, it had some great one-liners and an actual plot of sorts! The Rock really is a pretty good actor and comedian, and with the addition of Johnny Knoxville for fun the whole thing had me laughing hysterically in places. It also had me watching closely as I was aware that it was very loosely based on a true story. I think for what it was the movie did quite well to get as close as it did to a 'real bigshot' movie. I don't know that I would sell my soul to get my hands on this dvd, but it is worth watching once that's for sure.

Highlight: Any part with Johnny Knoxville

Simple. I thought it was corny, over-actioned and basically rubbish. I could easily believe some dumb american military hick would stomp his feet and try to take on the bad guys, but seriously, he'd get his butt stomped six ways from Sunday without them even raising a sweat in real life. "Hey, jerk..." "Yeah, what?" BANG! "Nothing."

This one is a real twister in many way. Way back in 1973 a movie was made based on the real-life antics of Buford Pusser, a genuine lawman who proved that the long arm of the law had a 4-foot club in it, and used it to great effect. The real Sheriff Pusser was a technical consultant on the movie. It was so good, it spawned a TV series in 1981 which flopped badly because it was just too far from the truth, all hollywood glitz and glamour.
Roll on 2004 and we see The Rock taking on the role of rebranded Pusser, now known as Chris Vaughn. Same attitude, similar situation, same 4ft club used to dispence justice. However, in this movie, the sidekick is played by his best mate, instead of a deputy who 'saw the light' and switched to the winning team, as in the original movie.
As a bit of trivia, at the start of this movie Vaughn asks "...what happened to the last sheriff..." and is told "...that the guy was a great man but they found one day he had mysteriously skidded off a deserted road and died hitting a tree." which is a reference to the way in which the real Buford Pusser died in 1974, a scant year after the original movie was released.
With a typically high level of action, violence and even the odd explosion or 30, this movie runs the risk of being labeled "just another Rock flik" but is thankfully saved from that fate by simply being quiet and almost tame in places. This is actually a good thing, because it gives the audience a chance to reattach to the plot, instead of being lost in all the fireworks and swinging fists.
A nice twist was casting Johnny Knoxville as a semi-unwilling sidekick/deputy, who is only doing the job because "Chris" is his best mate. With absolutely no fighting ability, a great sense of ironic humour, and the ability to fall flat on his back at the drop of a hat... his character really added an extra good note to the mix, again stopping this from being just another fireworks special.
If you like action movies that make some serious attempt at a plot that holds water, I think you will enjoy this one, especially if you also enjoy The Rock's style.

The modern mammal metropolis of Zootopia is a city like no other. Comprised of habitat neighborhood's like ritzy Sahara Square and frigid Tundratown, it's a melting pot where animals from every environment live together - a place where no matter what you are, from the biggest elephant to the smallest shrew, you can be anything.