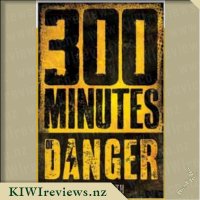 George is trapped in a falling aeroplane with no engine and no pilot. Milla is covered with radioactive waste and her hazard suit is running out of air. Otto is in the darkest depths of the ocean, where something hungry is circling. 10 dangerous situations. 10 brave kids. 30 minute to escape.

A very well done, fast paced, heart thumbing book involving ten random stories about children surviving the unthinkable events. Done up in half hour lots of someones life it tells how when faced with certain death you can survive anything.

I was very surprised how involved I got with each story. The first couple of lines set the scene and the rest is a pure adrenaline ride. I didn't bother looking at the countdown as I think that was purely for decoration I am sure it was not to scale but it helped with adding that extra notch to give that extra athenticity to the story. You could easily read a story a night without loosing any value to the book. Although they are all new characters and completely new stories a couple do interlock - but you are usually unaware of this until the last page.

I did love the writing style and found it to be very well written. I am sure anyone would enjoy this book as it is not aimed at anyone in particular. definitely a keeper for when my children are older. In saying that I would like to know what happened to a couple of the characters as once the countdown finishes so does the story. It never let you know if George made it off the mountain okay or if Milla and her family managed to walk away unharmed. It just stops and a new story begins.

I was intrigued with the idea of this book and when it arrived on my doorstep today I was straight into reading it. This book has ten short stories, with the aim that each story take you about half an hour to read (though it does say based upon average reading times, I only took about seven minutes per story but the book is aimed at 9-12 year olds). One thing that was a little interesting was that every page, for each story, had numbers along the right hand side of the page, counting down to their final minute, the aim being that each story is based upon just half an hour of these kids lives.

Each story was well done, I started off thinking there was no connections between any of the stories but then four stories involved the 'Flyrus', a nasty virus that funnily enough kills you in half an hour..., as well as two other stories being linked (and my guess is that one of those two is linked to the other four). All the rest were stand alone, though you could read each story as a stand alone tale if you wished to, you get enough basic information each time.

One thing that I really wanted to look for with these was a gender balance because it's important to me that my kids will get a good balance of both genders as the heroes in the stories and that they are all equal in their abilities. And there was a good balance when it comes to the children, an even balance of five lead boys and five lead girls! Woohoo! However there wasn't as much of a balance when it came to the adults, there were more male than female, and none of them were the 'baddie' in any of the stories, all of the 'bad guys' in this book are male. None of the adults were written really well, but when you are writing a story of kick ass kids you don't really want smart adults I suppose...

This was a good book and I will be keeping it in our bookshelf for my kids to read in a couple of years.

Learn how a group of Super Heroes formed a team called the Avengers.