Injustice: Gods Among Us review 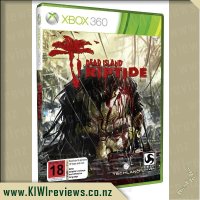 The survivors of the zombie-apocalypse on the once beautiful island resort of Banoi escaped in a helicopter to the safety of a military ship. When a furious storm hits and the virus suddenly spreads throughout the crew, the nightmare starts all over again, leaving hope drowning in the rising tides.

•  Devastated by a monsoon, the island of Palanai is crawling with new zombie mutations.
•  A fifth character with an all-new skill set will join the team, providing much needed support.
•  Additional multi player communication features and brand new hub defence missions will test the survivor's team play skills.

Dead Island Riptide is a better game than the first Dead Island game, and well worth a play no matter if you have played the first or not, it isn't necessary.

It picks up right where Dead Island left off, with the four original protagonists who are now shipwrecked on the island of Palanai. At first the game is a drag with a less than stellar main plot, but once you get into it you discover plenty of areas to investigate and of course, more than enough zombies to dispatch. The atmosphere in the game is impressive with little recordings from now undead occupants of the island adds far more tension to the game than the main story arc.

Each character has their own type of weapons and a unique set of skills, providing some incentive for multiple plays. Solo play makes for an intense, atmospheric survival experience, add a few friends to the mix and things get rather goofy like watching them drop kick zombies off ledges. There is a good amount of things for you to do, and should you have the time to play non-stop then you're looking at almost twenty hours of gameplay on the campaign alone.

A fun game, good instalment to the series, only let down by it's main plot.

Just Dance 2 will feature tracks from classic hits and legendary songs to today's chart-toppers. Players will enjoy moving on a wide selection of musical genres, including Pop, Country, R&B, Disco, Funk, Rock, World music, etc. Each track features its own choreography and dance lovers will move their bodies for hours on end. From ... more...