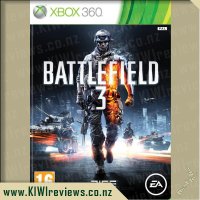 Battlefield 3 leaps ahead of its time with the power of Frostbite 2, the next instalment of DICE's cutting-edge game engine. This state-of-the-art technology is the foundation on which Battlefield 3 is built, delivering enhanced visual quality, a grand sense of scale, massive destruction, dynamic audio and incredibly lifelike character animations. As bullets whiz by, walls crumble, and explosions throw you to the ground, the battlefield feels more alive and interactive than ever before.

Features:
•  Frostbite 2 - Battlefield 3 introduces Frostbite 2, the incredible technology that takes animation, destruction, lighting, scale and audio to new heights. Built upon this powerful game engine, Battlefield 3 immerses players physically and emotionally to the world around them like never before.
•  Feel the Battle - Feel the impact of bullets and explosions, drag your fallen comrades into safety, and mount your weapon on almost any part of the terrain. Battlefield 3's cutting edge animation, spectacular visuals and real as hell battle gameplay attack your senses and make you feel the visceral warrior's experience like no other FPS.
•  Unparalleled Vehicle Warfare - The best online vehicle warfare experience gets even better with a fitting sonic boom as fighter jets headline an impressive lineup of land, air and sea vehicles. Other returning fan favourite features include 64 players for PC and prone.
•  Urban Combat - Take the fight to iconic and unexpected places in the USA, Middle East, and Europe including claustrophobic streets, metropolitan downtowns, and open, vehicle-friendly landscapes as you fight your way through the war of tomorrow.

I had gotten Battlefield 4 on the Playstation three when I bought my playstation, so going a step back to Battlefield 3 was an easy enough step to take.

Getting into the game really easily right off the bat, it's similar to Battlefield 4 but not a carbon copy (unlike some games that get sequels) so I really enjoyed playing it. You know a game is popular and well done, when despite a sequel being out for over six months, there are still more than enough people playing on line, so I was never stuck without someone to battle with/against. The on-line multi-player games are done really well, the only thing that I found with them, that could be taken as a good or bad, depending on your preference, is that the battles are quite long in comparison to other games.

The graphics are really good, especially when in high definition. Weaponry is good, you start off with the basic weapons, but as you play more (both in the campaign missions and in the on line games) your weapons increase in efficiency, range, fire power, ooomph and so on, with you unlocking plenty of little extras with which you can customize your weapons and make something that you can blast away your enemies with.

I really enjoyed this game and must admit I'm a bit addicted to it at the moment.

Give your gray matter the workout that it needs to stay sharp, focused and young. Dr. Kawashima's Brain Training: How Old Is Your Brain? is inspired by a book that was written by Professor Ryuta Kawashima, a prominent Japanese neurologist. His theories revolve around keeping brains young by performing mental activities quickly.

When users first start a new game of Dr. Kawashima's Brain Training: How Old Is Your Brain?, they will be ... more...