ProdID: 90 - The Temple of Elemental Evil
Developed by Troika Games 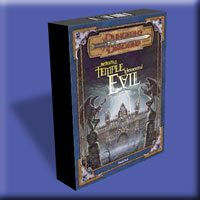 Long ago, in the land of Flanaess an evil demoness founded a cult dedicated to exploring evil in its most elemental forms. This cult was based in a temple just outside the village of Hommlet in a vile shire known as Nulb. Soon, this cult ruled the region with tyranny; times of chaos and violence ensued. Hard-fought battles were waged and the war was eventually won by the good armies of nearby lands. The temple was razed, the villains were imprisoned, and order was restored. The temple itself faded into distant memory...until now.

Recently, bandits have begun patrolling the roads outside Hommlet and wicked forces are rumored to be afoot, converging on the ruined temple at Nulb. Their purposes for such meetings are as yet unknown. The identity of these people are equally a mystery. Some claim they are bent on slaying monsters and maintaining order within the region, but no one can be sure.

So begins your adventure within the Realm of Greyhawk. It is an adventure that will lead to the source of a deep and abiding mystery, to the very core of evil itself.

Features
- Multiple story paths and multiple endings
- Five controllable characters and three followers in each party
- Richly varied environments populated with reactive NPCs
- Based on the Advanced Dungeons & Dragons 3.5 ruleset
- Characters that can be customized with skills, feats and spells
- Brought to you by the creators of Arcanum
- Party-based adventuring and tactical turn-based combat
- Gameplay that supports all alignments
- Formidable obstacles including a wide array of monsters
- First PC game based on the classic Greyhawk module

From what i'd seen on the TV and read in the magazines I was expecting this to be a Neverwinter Nights beater, but alas I was somewhat disillusioned.

I started playing the game, setup my party of five characters and set off into the wide world. My entire party was dead within 30 minutes of playing (strange how 7 Giant Spiders will do that isn't it?). OK I thought, it's been a while since I played D&D I must be rusty, so I tried again, this time with a more Fighter/Warrior balance to my party with a couple of spellcasters thrown in for good measure. This time I lasted for 50 minutes before my entire party was wiped out by a mixture of brigands and Giant Spiders (those damn arachnids).

Whilst i was a bit disapointed about the difficulty of the game so early on, I must give credit where credits due and this applies to the interface, the graphics and the sound all of which contributed to boosting the Value for Money score up a couple of notches. Otherwise I don't think i'll be spending much time with this game until the difficulty issues are worked out.

To earn your living as an artist - that would really be something. But what can you do if you're not creative?

In Final Touch, players hire themselves out as art forgers willing to copy the masterworks of great artists, with all of them competing to create - or rather, re-create - the same image. But only the player who uses the right colors to finish the image will receive money for their work, and this skill is sure to reveal ... more...