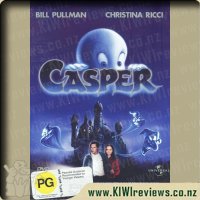 Furious that her late father only willed her his gloomy-looking mansion rather than his millions, Carrigan Crittenden (Moriarty) is ready to burn the place to the ground when she discovers a map to a treasure hidden in the house. But when she enters the rickety mansion to seek her claim, she is frightened away by a wicked wave of ghosts. Determined to get her hands on this hidden fortune, she hires afterlife therapist Dr. James Harvey (Pullman) to exorcise the ghosts from the mansion.

Harvey and his daughter Kat (Ricci) move in, and soon Kat meets Casper, the ghost of a young boy who's "the friendliest ghost you know." But not so friendly are Casper's uncles--Stretch, Fatso and Stinkie--who are determined to drive all "fleshies" away. Ultimately, it is up to Harvey and Kat to help the ghosts cross over to the other side

This film is so cute! I recall fond memories of watching this on a Saturday night on TV2 with my whole family. It was enjoyed by everyone, and I can honestly say, to this very day I can still happily watch Casper again. The directors have used the comic books well to create the baseline of this film. The characters are portrayed as they are in the comics which is great to see. Casper is a friendly ghost who makes friends with a young, living girl. Together they must work together to help Casper's uncles cross to the other side. This story has themes of family, kindness, life after death, and is just an all round feel good movie.

I like how in the film the ghosts all appear as figures, albeit slightly transparent ones. I mention this because I know of older films about ghosts where actors have worn white clothes to conceal themselves, and to come across as ghosts. So, for the director to create clear examples of ghosts in Casper was great. In the film there is some scenes which are clearly more computer generated. Whilst watching these now I laugh at the clear silliness of them, as a children I was clearly interested and entertained despite the poor graphics.

For some parents, this film may be considered negative due to content of ghosts. Dependent on the belief of your household, this film could open up avenues to discuss death and what happens to us after we die. The film could also be taken as a way to introduce fantasy topics such as ghosts, witches etc - things which are made up but are widely used in modern television. Overall, Casper is a lovely movie to watch on the weekend snuggled up with the kids on the couch.

I grew up with the Casper Comics so when I heard this movie was available to watch then it was a sure bet I was going to watch it. I love how they did the ghosts as they look the same like they did in the books with the same personalities.

The animation was brilliant and the actors were really believable, they must have had a blast getting those scenes right. What did catch my eye is that the other ghosts were white but Carrigan and Harvey both came back in colour and that although Harvey had problems with his flying it was obvious that Carrigan did not and then we see the ghost of Kat's mom who not only looked exactly like she did as a living person but she wasn't done as a cartoon ghost like all the others.

I would have loved to see or live in a house that has that much character, discovering the hidden passages and hallways. The sets were simply amazing. We also learn a bit more about Casper and who he was and how he died, as a kid I never thought about that but as I got a bit older I did kind of start wondering what the whole story about Casper is.

I know the kids love the movie as they were watching and asking questions about why is Casper a ghost and why is he so friendly when everyone else is so mean? I have a copy on DVD and it is frequently watched as a family movie.

Casper is another of my favorite movie characters. He is just such a cute little ghost, and I love that in this movie he is made to look cute and sweet and loving. Seriously who could be even remotely scared of a ghost that gorgeous lol my kids first watched Casper on TV and then asked me to buy the DVD for our collection. Which I of course obliged lol

It is easy to understand why kids love Casper the friendly ghost, not only is he cute and friendly, but children often feel lost and misunderstood and so they can relate to how little Casper feels when no one can see him. This is not a bad thing, it just means kids can connect with the character and probably not even know that they are lol

The animation of the ghosts is pretty well done, granted if the movie was redone now the ghosts would probably be absolutely amazing, but I don't think a new movie would be able to create Casper as perfectly as he is in this movie. It is a great family movie, a few laughs, and a few tear-jerking moments. The evil characters acting actually annoys me a bit, but thank fully we don't have to put up with them all to much haha I absolutely love Casper.

Casper, a movie that doesn't just provide some good fun for the kids but also a few tears.

There is a lot in here for the family, from the humour to the ghosts to the bad guys, the romance and the utter sadness of a child having died (something that affected me before I had kids and afffects me even more now that I have children of my own). When Casper plays with his toys, I always feel like crying at this eternal child stuck in an age of mystery and wonder. And yet, he's smitten with a girl--he's starting to go through puberty. And it's just so sad . . . and beautiful.

And then there's the father, and his sway into the afterlife, his daughter's plight, her struggle with her wish to help Casper. It's all so simple and written for kids, but I was am always captivated by it, what on the outside looks like a simple family film is so much more at the heart of it. The special effects are really good, though the uncles do look a bit too much like plastic at time, but this does aid their character a bit. The bad guys aren't that great, no strong feelings there.

This movie has real heart to it, well worth a watch, just maybe have some tissues nearby...

From the Director of The Devil Wears Prada, One Chance is the remarkable and inspirational true story of Paul Potts, a shy, bullied shop assistant by day and an amateur opera singer by night. Paul became an instant YouTube phenomenon after being chosen by Simon Cowell for 'Britain's Got Talent.' Wowing audiences worldwide with his phenomenal voice, Paul went on to win the show and the hearts of millions. BAFTA Award ® winner ... more...