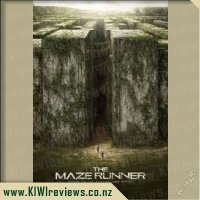 Thomas (Dylan O'Brien), a teenager, arrives in a glade at the center of a giant labyrinth. Like the other youths dumped there before him, he has no memory of his previous life. Thomas quickly becomes part of the group and soon after demonstrates a unique perspective that scores him a promotion to Runner status -- those who patrol the always-changing maze to find an escape route. Together with Teresa (Kaya Scodelario), the only female, Thomas tries to convince his cohorts that he knows a way out.

You know those movies that you are dying to see because of all the hype and then when you finally do get to watch it your left with that question of 'what the hell does everyone see in this movie??' Well this was one of those occasions.

At times I thought my three year old could write a better script. I was actually tempted to turn it off I got so fustrated with the movie. The idea is fantastic think The Hunger Games or even The Running Man - bunch of kids are stuck in a place where the only means to escape is to try and figure the maze but the execution is done so badly.. Theoretically it sounds fantastic but what my problem is in three years and no one thinks to kill the enemy. Three years and no one works it out and then finally when someone finally does start making progress the einsteins decide to hold him prisoner as if its a bad thing.

The whole thing did not make sense to me. I could not understand the logic behind holding these kids captive to begin with and I have got no idea what they could possibly do in the sequel. I understand the Hunger Games but this had me completely lost and the explanation had me so confused. I thought it was because I was sick but even my husband was scratching his head as to what the captives reasoning was. The lady explains it but I still do not get it.

I only hope the second movie is better than this first one or else I will end up missing the third. Twilight still remains the best teen book series to come out in my opinion. This movie absolutely reeks of "The Hunger Games". Children forced into a hostile environment, and left to fend for themselves, against things specifically designed to kill them. This story has far more problem-solving and analytic thinking, which I very much enjoyed, though it did seem to be a bit "dumbed-down" to appeal to the general public, and much of it seemed to be very fool-hardy and mainly guesswork, as opposed to actually taking time to think.

I liked the idea, of these kids being in a difficult situation and seeing them building a society in the area in which they deem to be safe, as opposed to risking their lives to escape, and the drama that occurs when new additions go against the rules is very well done. You empathise with the protagonist.

Special Effects were done well, and as I hadn't read the books I was really surprised by the ending. I'm quietly hoping for a sequel, as I am naturally curious to see where the storyline goes. It is quite the modern "Lord of the Flies", and knowing how badly we are disrupting the natural order of the world, it is not too far off of what could potentially happen in the future.

Score: 9.8
Product reviews for listing 3739: March of the Dinosaurs -  Topic: Dinosaurs in the Artic

This incredible story is seen through the eyes of one of the most vulnerable members of the herd, a young ... more...