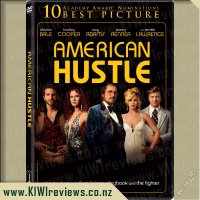 Disclosure StatementFULL DISCLOSURE: A number of units of this product have, at some time, been supplied to KIWIreviews by the company for the purposes of unbiased, independent reviews. No fee was accepted by KIWIreviews or the reviewers themselves - these are genuine, unpaid consumer reviews.
Available:
Mighty Ape

A fictional film set in the alluring world of one of the most extraordinary scandals of the 1970s, American Hustle tells the story of brilliant con man Irving Rosenfeld (Christian Bale), who along with his equally cunning and seductive partner Sydney Prosser (Amy Adams) is forced to work for a wild FBI agent Richie DiMaso (Bradley Cooper).

DiMaso pushes them into a world of Jersey powerbrokers and mafia that's as dangerous as it is enchanting. Jeremy Renner is Carmine Polito, the passionate, volatile, New Jersey political operator caught between the con-artists and Feds. Irving's unpredictable wife Rosalyn (Jennifer Lawrence) could be the one to pull the thread that brings the entire world crashing down.

It always amazes me how far American Stars push their bodies to get a role in a film. Christian Bale (probably best known for Batman where he had an incredible body) took his body in the complete opposite direction of past movies and has a pot belly, he's bold and has a terrible comb over and basically looks very bloated throughout the movie. He was very unrecognisable and unless you knew who he was you probably would never of guessed.

I have heard so much about this movie, mainly because of the awards it received. I had also heard there was not much story and was very boring, so watching this I took that in to account. Possibly because I had that outlook I really enjoyed it. Jennifer Lawerence was awesome as Christians wife. She was so believable with her crazy zaniness and I really enjoyed watching her.

Two con-people get caught by the FBI and in order to avoid jail time they have to incriminate four other people. I had no idea this was based on a true story and it is really sad how the FBI operates, not the first movie I have watched recently, where you can get off your sentence if you get other people arrested. I felt really sorry for Jeremy Reiners character, I didn't think he deserved jail time, true he was dealing with corruption but it was not for personal gain he was just wanting his city to become great.

I am not sure it deserved all of the awards it received, but if you're willing to change your appearance it seems to pay off as it did for Christian Bale. It was enjoyable, tad slow in places, a little confusing at the end but overall a good watch.

I had never heard of this film, so when my friend gave me a copy of it, I was a bit shocked to think that a movie with so many big names could go through the cinemas and reach the DVD stage without me being aware of it. Ultimately, I found out why I never heard anything about it.

This film took me three attempts to finish. I'd watch for half an hour and get bored and go do something else. Come back another day and watch a bit more...and lose interest again. Then just for the sake of finishing the job I watched the rest of it on a third occasion.

It really just failed to keep my interest at all. Practically every single character in that film annoyed me; Amy Adams proved to be the only worthwhile actor in this film. Bradley Cooper was irritating and in-your-face, Christian Bale was moody and irritable, and Jennifer Lawrence was immature and...I can't use the expletive word that I want to. Perhaps the characters were meant to come off in such a way, but it did not allow my to empathise with any of them. Amy Adams character, Sydney Prosser, was the one well-done part of this film, and her role in this film was unfortunately minor, compared to Cooper and Bale, even Lawrence.

Jeremy Renner was the second-best character in the film, and was incredibly one dimensional, but still was a character that I could empathise with and was the focus of the only part of the film that I truly engaged with. American Hustle was believable, and shot well, but the plot was unable to keep my attention.

I'd heard some good things about American Hustle and I was quite keen to watch it so when it came up for review I put my hand up and luckily I received a copy. My husband however, had never even heard of it so had no idea what he was in for.

After getting the kids into bed and making some dessert for ourselves we sat in front of a fire and started to watch the movie. I really had high hopes for this movie and I'm sorry to say that I felt a bit let down. It was really hard to get into and enjoy. I tried to keep an open mind and hope that it'd get better but the plot just seemed to slow down and at some points it just got really weird and left you wondering "what the heck just happened".

American Hustle is largely about a con man named Irving Rosenfeld (Christian Bale) who falls for a gal named Sydney Prosser (Amy Adams) and together they successfully con people out of their money by promising to get them more money. Not surprisingly Richie DiMaso (Bradley Cooper) from the FBI catches up with them and they are forced to work with the FBI to help bring down other crooks. There is also the problem of Irving Rosenfeld's ditzy wife, Rosalyn (Jennifer Lawrence), who is always getting in the way.

Even though I didn't particularly enjoy the movie I would have to say the actors did a damn good job at playing their parts and I think I would have enjoyed it more if it was just a bit faster paced. My husband also thought the movie was a bit slow but then again he quite likes fast paced action movies so it was definitely not right for him.

This is all my personal opinion however and what I don't particularly like, someone else may love.

After reading lots about American Hustle and hearing how good it was I was really disappointed to have missed it at the movies. When the chance to review it come up I was very excited and jumped at the chance to see it.

My husband really wanted to see it too so we snuggled up on the couch for a movie night. I don't know if it's cos of all the hype about it but I was expecting a lot more from it but I found myself really disappointed. While it is an OK movie and it is watchable it's not one I'm keen to sit down and watch again straight away. The pace of the movie also seemed to move very slow in places. I also ended up a little confused in places and lost what was going on. Thankfully I had my husband on hand to fill me in.

The movie is based on two con-artists who are caught red handed by the FBI and are forced to work with them to help them bring down others. There were a number of big names within the cast and you can see why many of the actors were up for Oscar nominations as they did well in their roles. If there were just a few tweaks in the script it would of been a much more enjoyable movie. After recently seeing Silver Linings Playbook I was expecting much more from a David O. Russell movie.

I think like most movies it's a matter of personal taste as to if you will enjoy it or not. My husband enjoyed the movie a lot more than me and is keen to watch it again.