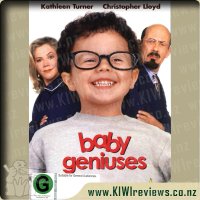 Dr Elena Kinder (Kathleen Turner) has a theory - that all babies are born knowing the secrets of the universe and that they communicate to each other with a secret baby language. At the headquarters of BABYCO, the evil Kinder runs a secret research facility with her counterpart Dr Heep (played by Christopher Lloyd from the Back to the Future series) and they've almost found the key to unlock the mystery.

Incredible wealth and power will soon be theirs...unless Sly and the other baby geniuses held captive in the lab can stop Kinder and foil her wicked plot.

This movie resonated with me on the same level as "Kung Pow" and "MacGruber". It was made in such a way that it looked like it was bad on purpose. Professionally amateur if you will. I remember when I first watched this film in the cinemas back in the last millenium, I thoroughly enjoyed it. That being said I was 9 at the time, so I didn't notice such things as dubbing or computer generated images. But I did understand the plot, and I enjoyed it.

Looking at it now, those finely tuned karate tricks are incredibly hard to come by, and the voices don't line up with the mouths (if the mouths are moving at all)

While the plot requires toddlers for this film, that means that the actors are pretty badly untrainable, so most appears to have been done with dummy's and CGI. But looking past the poor visual look, I still enjoyed the humour. It still had the necessities of a good film, even if much of it was over-exaggerated. And even now in my mid-twenties, I can still laugh at this. Whether it be because of the bad graphics, or the simple humour of someone getting hit in the nether regions with a wrench, it still entertains me. and thats all it needs to do.

I wouldn't pay to see it again, but if it were on tv, I'd definitely give it a watch.

Babies are cute only when they're being babies and at a certain age this is a fun movie, but a few years on and this movie is more bad than good.

Baby Geniuses is about toddlers who speak, plot, scheme, disco dance and beat up adults with karate kicks and look horribly fake whilst they are at it. Kathleen Turner plays a woman with a theory that babies are born with the knowledge of the universe and can talk to one another etc. She funds a secret underground lab run by Christopher Lloyd to crack the code. Her theory is based on the Tibetan belief that children have Universal Knowledge until they begin to speak which is when their memories fade away.

We follow a gorgeous toddler named Sly, who escapes from the lab, gets switched with the twin he didn't know about and tries to organize fellow babies in revolt. Every time the babies talk to one another, something weird happens to make it look like their lips are in synch and any time they do something a baby can't i.e.. hurl a full grown adult into the air, it's hard to keep your mind focused on the movie and not the bad graphics.

For a kid around eight this would be a fun movie, but beyond that, not for me thanks.

Life is no picnic for Z, a small worker ant with some very big ideas whose chances of landing the beautiful Princess Bala are literally one in a billion. But when Z convinces his soldier ant buddy Weaver to switch places with him, his simple life takes a wild turn. From his battles in the termite war to his search for "Insectopia," Z's adventures land him in a final confrontation with the ruthless General Mandible who has planned to ... more...