« The Caves of Steel review 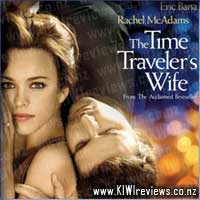 A Chicago librarian suffers from a rare genetic disorder that sends him hurtling through time whenever he is under extreme duress; despite the fact that he vanishes at inordinately frequent and lengthy intervals, he attempts to build a stable future with the beautiful young heiress he loves. Eric Bana and Rachel McAdams star in this dramatic fantasy.

Based on the best-selling book by author Audrey Niffenegger.

When I saw the trailers for the move I thought that it was going to be great. I had recently read the book, and loved the story line and the characters. While I wanted to see it when it came out, money was short and so I had to wait for it to come out on DVD. And to be honest, I'm glad that I did have to wait for it.

While it has two great actors in the lead roles, and two lovely young girls to play their daughter, I felt that this was too..... cardboard in effect. To me, it didn't flow, and when he time travelled, it was just confusing and often took me a minute or two to figure out where we were, when we were and so on.

All in all I felt this to be a let down, and not something I would tell others to watch. Stick with the book, it's far more believable.

Oh dear, and it had such a great title. This is another one of those cases where the trailer promises so much more than the movie delivers. (I don't recall thinking that since comparing the trailer and the movie for 'King Arthur'.)

Where should I begin? I was aware of the camera...no it was worse than that, I was aware of the storyboard!!! It felt like I was inside the head of the director at the very first brain-storming session for the keyframes. "Hey, let's start with a shot where this happens; then jump to one over there where that happens; hmmm, still on track with the story; let's have a shot where these guys meet; and one where this stuff happens...oh, nooo, we'll run out of time - just skip to here; no, lose that bit too; cut straight to where this version of him disappears over there; then that version reappears here; oh yeah, make sure THAT's in the next shot (and no we wont have time to explain); finally, a shot from this place at that angle and, alright... it's a wrap!"

There were some serious things missing from this story. And no, I have NOT read the book, so I don't mean things were missing compared to whatever was in the book. I am talking exclusively about the story as it unfolded in the film. It was as 'jumpy' as the time traveller himself (including some odd editing cuts). There was no foundation for a relationship between the two main characters. We are just supposed to buy that this little girl instantly falls in love with this much older guy who appears out of nowhere, for no other reason than he claims to come from another time and proves it by disappearing. What, so being able to disappear is a basis for enduring passionate love now? But wait, guys have been trying that for years without this level of success...

Perhaps if you HAVE read the book, you might be at an advantage to make various connections and stay in full command of the quantum leaps, thereby improving the continuity. But a good film script should be able to stand alone.

Honestly, I truly didn't get why these two people were attracted to each other in the first place (in fact, I'm not sure that I ever bought that they actually were...). Too much about the whole story seemed to be a contrivance, and too little was built on a plausible foundation. It was like skipping through scenes that followed some kind of sequence, but without a satisfying coherence. For me, the main characters just suddenly existed. No particularly endearing qualities were gradually (or otherwise) revealed about their inner personalities, interest, or even dreams, that would make me really like them as individuals and therefore care deeply about what was happening to them. All I got was two people with an insatiable physical lust for each other (it was so 'Edward and Bella', but slightly different). If anything I rather disliked the time traveller, especially inside some of his jumps.

By the way (just musing here) all of his cells have the same DNA (presumably in time synch or he would fall apart) so how come chunks of his head successively disappear (no real spoiler - it's in the trailer), would not every cell of his body disappear instantly?

Overall, it's not completely bad - it's just not as good as you might have hoped either. In spite of my previous aside, if you only have time or money for one 'romantic' movie this week, pass on this one and check out New Moon - not exactly great cinema, but it's entertaining.

Well... ah... based on the rather good book of the same name, this film gave me the impression that it was trying to cash in more than do credit to a cool idea. I have never been one of those viewers who whines 'they missed out whole bits from the book', in fact, I thought that Narnia's Prince Caspian was a drastic improvement, and it made up bits that had never been there in the first place. Time Traveler's Wife, however, was a profoundly bad movie.

The first scene was okay, cute even, with the young Henry escaping the car crash that killed his mother in a dramatic first display of his abilities, but things went somewhat downhill from there. I didn't feel any chemistry between the two leads and the 'jumps' were just plain confusing. They needed subtitles to tell us where he had jumped to or which version of him had just jumped in.

Things only really improved again for me when the couple's daughter turned up. Alba, played by Hailey and Tatum McCann (at different ages) was a shining star in an otherwise black hole. I loved when her father taught her to pick locks and when she was playing with her older self in the back yard. I hope to see more of these sisters in the future, but as for this movie? Well I wasn't particularly impressed...

Former astronaut Jeff Tracy and his five sons live on a secluded island, from which they run International Rescue, an organization dedicated to defusing dangerous international military and security situations. The team is known as the Thunderbirds, and evil mastermind the Hood is trying to eliminate them in order to complete his nefarious schemes in peace.