ProdID: 6997 - Hunt for the Wilderpeople
Directed by Taika Waititi 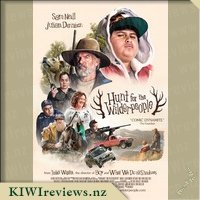 Hunt for the Wilderpeople product reviews

An adaptation of classic Kiwi novel Wild Pork and Watercress, by Barry Crump, Hunt for the Wilderpeople tells the story of misfit kid Ricky Baker (Julian Dennison). When Rickyâ ™s foster aunt suddenly passes away, heâ ™s left alone with his grumpy uncle Hec (Sam Neill). The unlikely duo find themselves on the run in the vast New Zealand bush, evading child services and the law. They are forced to work together to survive and despite their differences, form a bond in this hilarious and heart-felt adventure. Directed by Kiwi favourite Taika Waititi (Eagle Vs Shark, Boy and What We Do in the Shadows).

I'd seen the trailer and thought it looked like a lot of fun but didn't think I would manage to go and see it, however with just me and the littlest at home, a friend decided to treat us to a night out and I'm glad I got to see it on the big screen. This movie has really taken off and its not hard to see why injecting moments full of laughter, some sad moments and lots of beautiful New Zealand scenery. Our "hero" is pretty much the anti hero in some ways, he burnt things, defaced things, stole things etc. but the lad who plays Ricky Baker does a brilliant job and you're left hoping that things end up well for him, he has after all, reached his last hope before juvie and the likes.

There are some utterly hilarious moments which has the entire movie theatre in stitches and I thought they were done brilliantly (the Sarah Connor/Terminator scene comes to mind, as do many others). There are also some sobering moments such as when his foster mother dies (great job by Sam Neill with that scene, really hit the spot) and then the final few scenes between Baker and Uncle.... It's so great to have a wonderful New Zealand film and I hope it goes far. The only thing that I didn't like within the film was the two pig scenes, more because I felt that they were a little over the top but it's a minor thing as it could have been far worse.

Miss 5 had fun and I heard lots of wows from her at the scenery, I had many a laugh and came away having enjoyed the whole thing, I would suggest this to everyone, especially as its home grown, even better.

Struggling with frustrations from unfulfilled dreams, 40-year-old Maya gets a chance to prove to Madison Avenue that street smarts are as valuable as book smarts and that it's never too late for a second act.