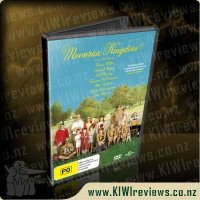 Set on an island off the coast of New England in the 1960s, as a young boy and girl fall in love they are moved to run away together. Various factions of the town mobilize to search for them and the town is turned upside down -- which might not be such a bad thing.

Set three days before a massive storm, Moonrise Kingdom is a film about two 12 year old's who met, became pen pals, fell in love and decided to run away together. He has no family that cares, and her family are distant, labelling her as the trouble child.

The young boy and girl in this movie are brilliant in the film, both portraying their characters brilliantly. Their acting is flawless. Both kids are a bid odd in their demeanour, but it's pulled off so well between script and acting that they are still lovable characters that you find yourself rooting for as they attempt to run away.

The adults all do a great job. Bill Murray as the girl's father, Bruce Willis as the police officer sent after them. I must say, that being used to action films from Bruce Willis, I wasn't sure what to expect from him here, but he really pulled it off and I loved his character. The film though overall was a great charm thanks to two young lovers.

This is a well pace movie, not once was I thinking that it was too fast or too slow. There's a good mix of genres with the film switching between romance, drama and laughs. Everything in this film works so well and flows great. I would love to own this one day.

Score: 9.7
Product reviews for listing 255: The Day After Tomorrow -  Directed by Roland Emmerich

A look at what the world would look like if the greenhouse effect and global warming continued and ocean currents changed due to alterations in salinity. This would result in worldwide catastrophe and disaster, including multiple hurricanes, tornadoes, tidal waves, floods and the beginning of the next Ice Age.

At the center of the story is a paleoclimatologist (a scientist who studies the ways weather patterns changed in the past), ... more...