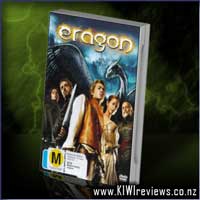 Based on the novel by Christopher Paolini. Prepare to enter a dazzling world of myth and magic as the first thrilling chapter of the Inheritance Trilogy takes flight!

In a kingdom ravaged by darkness and tyranny, one small ray of hope emerges when Eragon (Ed Speelers) finds a mysterious blue stone that turns out to be the last dragon's egg in existence. From the moment it hatches, their fates are forever entwined, as Eragon and the dragon Saphira (voiced by Rachel Weiz) join forces to battle the evil King Galbatorix (John Malkovich) and his demonic sorcerer, Durza. Packed with non-stop action, spectacular special effects and an inspiring story about believing in yourself, this fantastical adventure will fire up your imagination.

I am one of those people who is really picky about movies, and often it takes a lot to hold my attention and please me in the movie stakes. I am a big lover of true story based movies and books, which could be why anything not based on a true story really has to prove itself to me. I do however love the idea of Dragons, so Eragon pretty much appealed to me straight off the bat lol

"Eragon" is rated PG for fantasy violence, intense battle sequences and some frightening images. And even though it is not terribly gruesome or scary I think the PG rating is a good one. Possibly the most notable thing about "Eragon" is the special effects, and the visual effects are well done too. Saphira (a dragon) is the truly amazing, her design is quite unique, with a combination of scales and feathers that give her a look unlike any other movie dragon. I thought she was really cool.

There are a few wee let downs in this movie, it is after all based on a book, a book which mentions elves and dwarves, yet you do not see them in the movie, also you never find out why Arya has the dragon egg to begin with. These gripes are nothing major and when you consider the fact a 15 year old boy wrote Eragon in the first place you forget about some of the inconsistencies when it comes to the movie.

All in all I really enjoyed Eragon, so much so, I actually bought the DVD, and that is most definitely saying something!

Despite much criticism from many others of my peer group (that Eragon is a blatant rip-off of Tolkien and other 'real' fantasy writers), I genuinely enjoyed watching this film. The young farm boy who becomes a hero is reminiscent of a hundred different stories, from Princess Bride to Star Wars, but that just gives us a comfortable place to start from. Eragon was nowhere near as whiney as Luke Skywalker and Saphira (the dragon) was adorable, especially the excellent work put into the animation of the baby dragon hatching from her shell. Rachael Weisz (The Mummy, The Mummy Returns) brought a depth and wisdom to the voice of Saphira that made the young dragon a credible and entirely believable part of the cast.

My favourite character, however, was Murtagh, the dark and brooding, yet charmingly heroic young man who turns up later in the story to help Eragon and Arya. Garrett Hedlund, the actor for Murtagh, seemed to steal the scene whenever he was present, making me want to see the rest of the story onscreen.

Unfortunatley, there are no current plans to make Eldest or Brisinger into films, at least not with these actors. So, though well cast and nicely produced, Eragon has a slightly incomplete feel to it.

I had planned to read the book before I went to see the movie, but plans didn't work out that way. I am so glad I saw the film first, as I think that helped me just watch the action and not get bogged down with what was gonna happen next.

I have had a fascination with dragons and fantasy movies for many years. I had the hope there would be at least some interaction between the actors and the 'dragon'. I was not disappointed. The best part for me being when Saphira flies off through the clouds and goes through a spectacular growth spurt. I know now it isn't in the book, but the version in the film looks better and more dramatic.

Jeremy Irons as Brom, now I have read the book as well, was a great choice for the part. It was also nice to see Joss Stone doing more than seranading us with her great voice. Her part as Angela the Witch was short but, for me, memorable.

I am intending to add this to my collection, when the price comes down to a less painful amount.

Christopher Paolini's story of a boy's fantastic journey into Manhood, filled with dragons, elves, evil kings, dark creatures, and fierce battles, is brought to warm wonderful life with a great cast, and the guidance of a great director- Stefan Fangmeier... keeping me as thoroughly captivated the whole way through as I had been with the original book.
Despite the odd bit here and there deviating from the original storyline somewhat (such as with Saphira's growth from fragile dragonet, to a fully fledged, able to fly adult dragon), and a few scenes I'd felt were key parts in the book, being left out in the movie (like Murtagh's story, and bonding with Eragon), I found the movie to be completely enthralling, and leaving me sitting there sorely tempted to sit and watch it straight through a second time.
In my opinion, the main actors were well suited to their roles- John Malkovich's cool and somewhat bland demeanour only seeming to add to the evilness of King Galbatorix; Robert Carlyle's dark, manic aggression as the Shade, Durza, showing a completely different side from his role back in The Full Monty, showing that he's just as good at playing evil villains as any other role I've seen him in. Oh- and then of course there's the wonderful Jeremy Irons, absolutely perfect as the role of Eragon's mentor. Brom had been one of my favourite characters in the book, and I honestly couldn't think of a better actor to bring out his warmth, strength, and discipline, than Irons!!
Not really a lot to check out in the "Special Features" section though, although I did thoroughly enjoy the movie commentary by the Director- Stefan Fangmeier, as it gave a lot of insight as to how some things were done, and why parts of the book were left out in the movie.
Overall- a great movie that is already a favourite in my collection, and one where it honestly doesn't matter whether you've read the book or not!!

The author of Gone Girl takes you on another dark and deadly journey to the epicentre of fear and the far corners of sanity.

Libby Day (Charlize Theron) thought she had left her childhood nightmare behind in her small, squalid hometown. New forces beyond her have re-opened the one chapter of her life she never wanted to face again.

The sole survivor and only witness ... more...