Doctor Who: The Husbands of River Song review 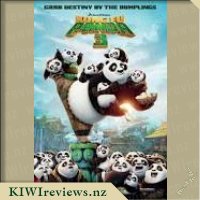 We were lucky enough to win tickets to Kung Fun Panda 3, so during Easter weekend my partner and I took Miss 3 along. As with the previous 2 Kung Fu Panda movies, Kung Fu Panda 3 certainly didn't disappoint with the lovable panda Po goofing around and leaving you in hysterics right from the very start of the movie.Miss 3 was most excited when Po meets his Dad for the very first time and ends up going with him to a Panda colony where we meet a whole lot more cute, cuddly and adorable pandas who all end up helping and guiding Po throughout the movie as he sets off on his quest this time round.

The graphics were very well done especially for an animated film of this kind, the animal characters had great details and a lot of detail seems to be put into emphasizing them rather than the backgrounds, which at times I have to be honest and say at times really did appear to be lacking the 'WOW' factor, however I did seem to think that this was perhaps purposeful due to the way that the story was being told. The main character throughout the movie is without a doubt Po, with the rest of the fabulous five being kind of left in the background in regards to how much screen time they have had in the previous movies, which both myself and Miss 3 did find a bit disappointing as they do help add to the character of the movie.

My daughter loved this movie and was happy watching it most of the way through however did become rather scared near the end of the movie when Kai the scary bull monster surfaced on screen regularly and was battling with Po, she was most concerned about Po's safety and that her cuddly Panda character may get hurt. To be honest I do feel she was probably a bit young for this movie and that it is probably more suited to children aged 5 and up, as it's not as tame as the tv series based on Kung Fu Panda.

All in all this was a great movie with lots of humour and some great morals such as that family is not always blood, and that practice makes perfect, the soundtrack is fantastic and it has a lot of great moments as opposed to negative or sad ones, all in all a very happy ending.

My kids have seen the first two Kung Fu Panda movies and were keen to see this from the first moment that they saw the trailer. We managed to go to see it during the long easter weekend and took along a friend who hadn't seen the previous films yet. We took Mr 8, Miss 7 and Miss 5 and right from the opening they were hooked, bouncing into action and I love that right away there's an unexpected result. The movie throws in several laughs as well as a few moments that may be frightening for some kids and some heart wrenching/warming moments.

We meet a big range of pandas and I love the range of personalities that we get to meet through them and how each one ends up aiding Po and his quest this time around. There are some moments where the background is a little lacking but doesn't detract from the story, and there are some moments where I thought the scenery was quite stunning for an animated film. The characters are well thought out, though if the fabulous five is your main drawing card then don't expect to be seeing much of them, I felt however that this didn't detract from the film at all.

The story runs well and is great at showing that where you come from doesn't need to be lost when you figure out where you are going and I LOVE that Po ends up with two dads :D. We all walked away from this having had a great time and the kids would love to see it again.

We fell in love for Po, Master Shifu, Monkey, Mantis and the rest of the Furious Five from the television show. The 'sweetest' theme song and the loveable antics of the cuddly, naive panda has had us all in hysterics on more than one occasion. The movies have always been a let down so I was a little concerned before seeing this version. Let me put your minds to rest it is 'awesome'. The third movie is more like the television show so goes back to basics and has you laughing, cringing, facepalming and just grinning from ear to ear.

The images are not always complete and I found the background plain more than once but it works as your eyes are totally focused on what is happening right in front of you. It is not a complicated movie at all and Po finally meets his real dad (spoiler alert Mr Ping is not his real father). It is cute and gives you a few hidden messages about the meaning of life. The good guys win and order is restored once again.

The characters are all loveable especially the new panda village. It does, however, mainly focus on Po and his two dads, unfortunately the furious five take a bit of a back seat. Which is sad as they are all amazing actors and it would be nice if they are used more in future movies

My youngest did get a little scared during the final fight and asked to go home, but once I put my arm on her leg she relaxed. There were also a couple of occasions that she or someone else in the cinema asked 'what was happening' and 'why did they do that' but as a whole it is a simple, enjoyable family movie. Pretty straight forward Kai has returned from the spirit world wanting to capture the chi from all all kung fu masters and only Po can stop him. It has gone back to the original routes and it works. A loveable movie that both of my girls want to own on DVD. I even found myself walking out of the movie theater grinning and agreeing it was a 'pretty sweet' movie.

Score: 9.5
Product reviews for listing 5184: Back to the Future
Directed by Robert Zemeckis

During his often hysterical, always amazing trip back in time, Marty must make certain his teenage parents-to-be, Crispin Glover and Lea Thompson, meet and fall in love - so he can get back to the future.