The Blind Side review 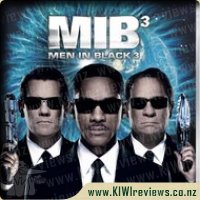 J discovers that there are secrets to the universe that K never told him - secrets that will reveal themselves as he teams up with the young Agent K to save his partner, the agency and the future of humankind.

So the Men in Black are back for the third time, and I was just as excited about this one as I was about the first two. Unfortunately like many movies they do not always live up to their predecessors. Men in Black 3 is still a good movie, but the first one will always be my favourite.

MiB 3 happens 15 years after J (Will Smith) joined the organisation. K is still there also despite leaving MiB in the second one for the comforts of civilisation. This time though Ks life is in jeopardy and it is up to J to save him. To do so J must travel back in time and find K as his younger self and like all the other movies, fight some aliens, shoot some guns, and maybe blow up some things.

Time travel has happened in many different movies, generally with some kind of vehicle involved. In MiB 3 time travel happens with a small device and by way of jumping off a building. Its doable, perhaps not overly believable, but when it comes to the MiB anythings possible. And so J travels back in time and the adventure begins.

I enjoyed MiB but I do admit I found the actor chosen as Ks younger self to not really match the role and was rather irratating and annoying. I do believe there are much better actors that could have played the part better. However that being said the movie as a whole was good. It kept my attention and made me laugh. As I said not my favourite MiB movie but I would (and have) watched it again (and again).

So it's been 15 years since Men in Black 2, and one can excuse some scepticism about whether or not the old magic can be recaptured and a good film still be made. Well... I LOVE this movie, even more than I enjoyed the first two films, it has such great characters and really shows how much Agent J cares for his partner (even though he does need to survive in order to save the world).

I really liked how back in the 60's aliens were a little more open, they could dress weird without garnering too much attention, as that was the style. Andy Warhol is a MIB agent, some of the gadgets are bigger, even the neuralizer (the memory eraser gadget) takes time to load up, sounding like it is on dial up mode.

Josh Brolin does a fantastic job as a young Agent K, even though he said in a n interview that he wasn't trying to imitate Agent K, but bring a bit of himself to the character, his acting is so spot on that he is nothing but Agent K. There are some lovely new characters, and the special effects are fabulous. The comedy hilarious and there is great heart to this movie.

Keep an eye out for Barry Sonnenfeld again, as he makes his standard cameo. And pay special attention to the end, as it does a lovely full circle and gives an answer as to why K wanted J as much as he did for the MIB.

The Princess Bride is a 1987 American romantic comedy adventure film directed by Rob Reiner, based on the 1973 novel of the same name by William Goldman. Critically acclaimed and equally loved by adults & children!

The Princess Buttercup (Robin Wright Penn) is saddened by the disappearance of her true-love Westley (Cary Elwes), and finds that she now has no choice but to become engaged to the evil Prince Humperdinck (Chris Sarandon). ... more...