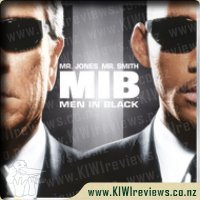 Men in Black follows the exploits of agents Kay and Jay, members of a top-secret organization established to monitor and police alien activity on Earth. The two Men in Black find themselves in the middle of the deadly plot by an intergalactic terrorist who has arrived on Earth to steal a valuable artefact, and trigger a military response against the Earth. In order to prevent Earth's destruction, the MiB must track down the terrorist first, recover the artefact and return it within 24 hours.

It's just another typical day for the Men in Black.

There are few things in this world that make me shake my head or laugh at the mere prospect of their existence. Zombies is one of these things I do not believe in, and up there with zombies, almost hand in hand, is aliens. I for whatever reason do not believe in aliens. I get the concept, its a massive solar system, surely we are not the only ones in it, but seriously if aliens truly existed do ya not think we would have seen a real one by now?

But as much as I do not believe, I can entertain the notion. Especially when it comes to one of my all time favourite movies in the entire galaxy, Men in Black :) I love this movie so much. Will Smith would be my all time most favourite actor ever. When Kay of the MiB needs a new partner, he stumbles across Jay (Will Smith), once he convinces Jay to join the MiB, he takes him to the MiB headquarters where he receives his own black suit and shades. Once in that suit his life will change forever because the galaxy us huuugeeee and there are aliens out there

I want to join the MiB. I want a black suit and shades. I want a really cool theme song, a great partner and bright coloured aliens to destroy with my super cool amazingly impressive guns with lazers and stuff. Yip I wanna join the MiB

The movie (storyline) is not all that believable but because Will Smith is in it, its jam packed with brilliant one-liners, plenty of laughs, some pretty snazzy aliens and as an added bonus the theme song and dance are super super awesome.

We are not alone, aliens really do walk among us, and there really is a top secret organisation (unknown to even the government) that ensure these aliens obey are rules and above all, stay a secret.

James (Smith) ends up discovering the Men in Black when he chases down an alien who then gives him a warning that all is about to end. Agent K (Jones) sees potential in the young James, though few others see what he can, and James becomes Agent J, putting on the last suit he'll ever wear.

This movie did a great job of balancing the bigger threat of the end of the world, with Agent K learning about the secret world of aliens co-existing with humans, all his life having been oblivious to the truth. The story is well done as Agents J and K race to save the planet, figure each other out and Agent K learning the ropes.

The special effects are well done in this film, when you have alien technology in the mix you can expect some good blasts. Keep an eye out for the director, Barry Sonnenberg, as he has a short cameo appearance in the film.

All in all this is a really well done film, and it's believable.