Sorry To Bother You review 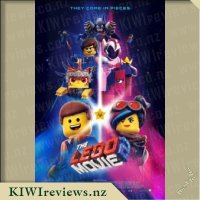 Disclosure StatementFULL DISCLOSURE: A number of units of this product have, at some time, been supplied to KIWIreviews by the company for the purposes of unbiased, independent reviews. No fee was accepted by KIWIreviews or the reviewers themselves - these are genuine, unpaid consumer reviews.
Available:
11 April 2019

You have to love a child's imagination, anything can happen and quite often does. There were a lot of jokes and adult humour but nothing that was too over the top. The special effects and the Lego was amazing, it would be so easy to imagine a world where Lego people come to life and see the parallels to normal human emotions and events.

As an adult and a mum I could see where the story was going, it was done in a way that children can understand but parents were chuckling over the situations that the characters were facing. The movie used great music that the children can identify with and they made great use of lingo and dance moves young kids are using so it would appeal to them as well. I really liked how the conflict was solved, the Lego world also has characters facing things "growing up" and it is what kids are facing in real life so they can feel more confident talking about what is going on in their own lives.

I asked my kids for their thoughts on the movie and first off they told me that we have to own it on DVD. My son said that he enjoyed the movie and that he could identify with the movie and he felt that it appealed to him as he loves lego and has a wonderful creative imagination. My youngest said that he enjoyed when Batman did the floss and he really enjoyed how they used things that kids do everyday as part of the movie, he actually demonstrated how to do the floss so I would know what he was talking about.

I would buy this on DVD and watch it again, I'm hoping there is more Lego movies as there is so much that can happen in a person's imagination and there really is no limit to what the characters can face.

My three kids have enjoyed almost all the Lego franchise film offerings and from the second they saw the first teaser trailer, they've been looking forward to the Lego Movie 2: The Second Part, a keenness which has only increased with each trailer, so all were most excited when we got to go to the movie premiere.

The film starts immediately after the first and then jumps ahead a few years to see how everyone is coping with alien invasion after alien invasion. Soon enough Emmetts friends are taken prisoner and it is up to him to save the day. As one can expect, there were plenty of pop culture references along the way, from Rex Dangervest naming all his various jobs (a nod to Chris Pratts various roles), to the Raptors names after different sci fi characters a good portion of adults will know (with a nod to the fact that it's not a film kids can watch yet...). There were different time machines such as the DeLorean and the TARDIS, as well as plenty of Batman self references and Bruce Willis' jokes about his role in Die Hard. The kids get a nice amount of current references including Batman doing the Floss.

The film is peppered with moments that are set in the real world, the first couple of times this felt a little odd to me but I got used to it quickly and given that this was a bigger part of the film I felt it fit in much better than it did in the first film. I liked that everyone reprised their roles, including Jadon Sand as the young boy and that the new minifigure of Aquaman was voiced by Jason Momoa. There are a few plays on words which I liked such as Sistar System, Queen Watevra Wa-Nabi and Our-mom-pocalypse... The plot flowed well, though there were times which were obvious as to where it was headed, my eight year old loudly and happily declared "that's the bad guy!!!!" (do note for her, bad guy covers males and females), but it moved at a good pace and there didn't seem to be any moments where anyone was bored.

There have been a few good songs to come from the Lego films and this movie isn't any different. The first film gave us 'Everything is Awesome', which is reprised in this sequel, but for the designed to make you dance song in this round we go the aptly named 'Catchy Song' which has the main phrase of "this songs gonna get stuck inside your head" and it did indeed. 'Not Evil' is well performed by Tiffany Haddish and gives off great bad guy vibes and was lots of fun. I will admit that during the end credits I did get up and dance a little in the aisle whilst waiting for the kids to gather up their stuff and the soundtrack is currently playing at the request of my kids.

All three of my kids had a blast watching it and can't wait for it to come out on DVD so they can watch it again and again. I enjoyed it as well, more so than the first and yes, I totally have that song stuck inside my head...

As he tries to figure out why he survived and tries to deal with people in his town, like the ... more...