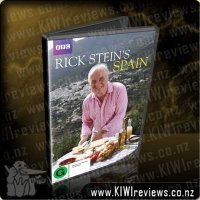 Using his friend's old campervan, Rick Stein climbs aboard to travel the length and breadth of Spain in search of a culinary duende - a flamenco term, implying a sense of soul, expression and authenticity.

From Galicia, the Basque country and Catalonia to Castilla-La Mancha and Andalusia, Rick samples his way through the specialities and hidden treats of each region, including the famous Asturian fabada, a hearty bean stew; pintxos, delicious Basque tapas; the sweet and succulent prawns of Palamos in Catalonia and food influenced by the New World in the Antigua Abaceria of Seville.

Along the way Rick savours the delights and atmosphere of the cider festival at Gijon, the snail festival in Lleida and a spectacular paella festival in Valencia, as well as observing the skills on display at vineyards, beach parties, garlic farms, secret Cabrales cheese caves and much more.

Rick's a funny old bird at the best of times, I have found, but when he gets into one of his "food of the region" jigs, he's as passionate and entertaining as an aficionado at a banquet. In this case, I think he's done an excellent job of showcasing a huge variety of Spanish foods, and highlighted the differences between "food for the tourists" and "food for the natives" - and there really is a huge difference in some cases.

I was highly entertained by some of the clips - particularly the young chaps with the Tapas Bar who used an espresso machine to steam clams and cooked almost everything else on a burger grill - the inventiveness and creativity they showed brought a huge smile to my face, and a renewal of my culinary-creativity urges. I have some wonderful new dishes I want to experiment with and introduce to my family... despite finding 90% of the dishes I saw utterly unappealing!

Does that seem a surprising contradiction? It does to me. Honestly, I have NEVER been a fan of any food that requires the inclusion of shellfish of any type, crustaceans, cattle blood, entrails, offal, or cheeses that smell worse than my socks... and traditional Spanish food is jam-packed with all of these. However, with some clever replacements - garlic salami instead of black pudding, nice firm fish instead of shrimp or lobster, a tasty cheddar instead of the stone-cured blue cheeses - there are some very intriguing possibilities floating around in my head that I want to play with.

Overall, even though I can not help but see Rick as a bit of a doddering dandy most of the time, the man knows his food, his wine, and his intestinal fortitude to the finest degree, and is never afraid to shove some strange new food into his curious maw - I tip my hat to him, and hang my head in shame at my utterly tame and provincial taste preferences... but honestly, some of the things I have seen this man eat make my tummy churn at the mere thought. You're a braver man than I, Rick... so thank you for blazing the trails that lead to inspiration for us tame-bodies.

Another excellent for any foodie seeking inspiration!

The mythical city of Camelot, in a time before history began. A fanatical realm of legendary beasts and mysterious peoples. A dangerous world in which magic has been banned by the ruthless tyrant, Uther Pendragon. When Merlin, a young man gifted with extraordinary magical powers, arrives in the kingdom he quickly makes enemies including the heir to Uther's ... more...