« SHINE: Make Them Wonder What You've Got review 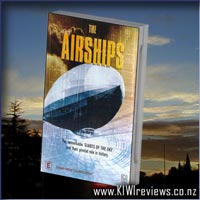 I used to think I knew a fair bit about the Era of Airships, boy was I wrong. When you mention "Airships" most people look at you funny. Those that are aviation enthusiasts will look at you with a sparkle in the eye. They understand.

When you think of airships, you probably think of the most famous of them, the Hindenberg... one of the biggest airships ever built. But you probably don't know much of the history, the trials, tribulations, successes and failures, that lead up to that point. Did you know that airships have been around for 115 years?

Do you know the difference between a blimp, a dirigible and a true airship? If you do, great. If you don't, but are curious, you should find this DVD and watch it, all 157 minutes of it plus extras. We have come a long way in terms of travel options, but it almost seems a shame that we never mastered lighter-than-air travel. The pace, the luxury, the sheer opulence... there's nothing quite like it.

Overall, I was really impressed with the detail that went into this documentary. No actors, it's all actual footage, with a little bit of computer animation at the very end... after all, it could be considered difficult to take film footage of a future event that may never happen. This one will join my collection of 'informative stuff' and will be welcome there.

The TARDIS materialises not far from Paris in 1794 - one of the bloodiest years following the French Revolution of 1789. The travellers become involved with an escape chain rescuing prisoners from the guillotine and get caught up in the machinations of an English undercover spy, James Stirling - alias Lemaitre, governor of the Conciergerie Prison.

With many of the episodes missing footage but having found the audio, The Reign of Terror has been lovingly restored using striking animation.