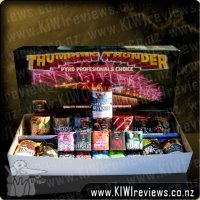 Disclosure StatementFULL DISCLOSURE: A number of units of this product have, at some time, been supplied to KIWIreviews by the company for the purposes of unbiased, independent reviews. No fee was accepted by KIWIreviews or the reviewers themselves - these are genuine, unpaid consumer reviews.
Available:
November 2nd - 5th - See website for nearest supplier

Designed by Kiwis, for Kiwis, this pack is aimed at the serious whizzzz-BANG enthusiast.

Great for larger-area displays where the sharp reports will reach even the furthest audience members' ears, and echo off buildings with style, and the projectiles will light up the night sky as they leave trails of fire behind them, to expire in bursts of brilliant colour.

In this economic climate, one must always shepherd their coins to get the best from them. But now and then quality has to win out over quantity... and if what you want is to put on a show the neighbours can enjoy as well, why not all chip in and look at buying some fireworks from these guys - they have regional stores all over the country this time of year and if you want something that goes WHHHHEEEEEEEEeeeeeeeee.... *BANG* instead of the whheeeee-pop you get from the generic fireworks you get from the supermarket or chain discount stores, then pop on over ot their website and check out where your nearest stockist is.

After having a box of these in storage for a year, waiting for the right time to fire them up without unseasonable annoyance for the neighbours, it was time to put them to the test of fire. I test, they fire. Simple really. Now, because our new home is in a very densely populated area, and I didn't know how big these bangs were going to be, I decided to take this testing out to the local park. It's big enough to leave room for fireworks to discharge in safety, has running water nearby (but a big bucket of water was right by me at all times during the test) and I hoped the noise would dissipate somewhat before it hit houses. Ummm... yeah right!

To start with, I let off one of the more expensive 'roman candles' from a generic fireworks pack. Sure enough.. wheeeeeee-pop... eight times. Not a curtain twitched, no doors flew open. OK, the neighbours are cool, let's go... the VERY FIRST Roman Candle from this pack - the "8-shot Auckland" had kids flooding out of their homes with some fireworks stashed from last year in tow and either gathering around to ask questions and try to get some fireworks off me, or over to gather at the other end of the park to let off theirs. This was one seriously loud candle! 8 shots - #6&7 right on each other's heels - and I had EVERY window nearby showing a silhouette or two.

A few more of these, no cops had arrived to issue noise complaints, so it was time to try the "self-righting" mortars. These are designed to be top-light, bottom-heavy so that IF you are just plain stupid enough to light and throw them, they will more often than not land upright and fire their sparks upwards. I love how these fireworks have been designed to try and make them accident-proof and especially drunken-idiot-proof. Sure, it's just plain wrong not to treat these with the utmost respect - they are EXPLOSIVES, people, HELLO! - but it's also reassuring to know that even some accidents can be prevented simply by applying good old Kiwi Ingenuity to the manufacture of them. Well done guys!

These were of course projectile launchers, and of them all, my favourite has to be the signature model for this company, the "Stu's Revenge" - named after the man behind it all. In fact, many of the pyrotechnics are named after Stu's family or friends, as well as nationally known places, people or linked locations. The graphic design of the wrappers is also 100% Kiwi-centric too. Great to have on hand when overseas family or friends come to visit.

Overall, this box had a good solid 240+ 'launches' in it - that's a little scary when you look at it as each ball of fire costs you around 80c... but consider this... these are professional-grade pyrotechnics, not cheap and nasties made by kids in a stinking hot shed and left in storage for anything up to 3 years. No, these are quality display-grade fireworks made and imported freshly, designed specifically for the NZ market with extra safety features built in that I won't detail - because I don't want to give ideas to anyone who thinks it's funny and smart to be stupid with explosives - and have more than your average fireworks could ever dream of being.

These fireworks don't go -pop-, they go *BANG* . They are the Piri Wippu of retail-accessible fireworks - and you know you aren't going to beat that! My only disappointment with these was that they were gone so quickly. I could easily have spent a good 2-3 hours letting these off just to enjoy the spectacular aerial display as they launched a good 10m into the air and exploded into a hail of shining sparks, or sheets of tiny stars, or shells of glowing light, or... so many options! Some leave trails of fire behind them as they soar, some scream heavenwards and explode into glory lighting up the surrounding area... what's not to love! Except, perhaps the VERY loud bangs. Some people aren't going to like that aspect at all I suspect.

Overall, for BANG for your buck, it's hard not to consider these top-notch options. I would have liked to have seen more variety in this pack - but it is targeted firmly at the male-dominated "Things You Make Go BOOM" market. For the family gatherings there are a number of other packages which we hope to be testing and reviewing next year... because once again we find ourselves too late to do much else than buy some to stockpile.

Score: 10.0
Product reviews for listing 2029: Jane and the Dragon - Last of the Dragon -  Type of Show: Children's Animated Series

Twelve year old Jane is a strong-willed girl who defies convention to follow her dream of becoming a knight. Brought up in the Royal Court to be a lady-in-waiting, a combination of determination and good fortune has made her dream come true.

Jane, her clumsy friend Dragon, and the many other eccentric and endearing characters who live in the castle find themselves a series of comical adventures, while teaching children the importance ... more...