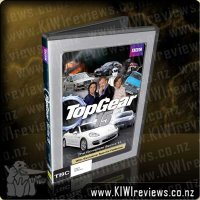 Get ready for more thrills, spills and mayhem as television's most daring trio Jeremy Clarkson, Richard Hammond and James May - plus the mysterious Stig return for the 15th series of the world's biggest car show Top Gear.
In the first episode, Jeremy asks why there aren't more three wheeled cars in the world and investigates further with a closer look at the 1980s comedians' favourite, the Reliant Robin. Meanwhile, James gives Top Gear's favourite warhorse, the Toyota Hilux pick-up, one final assignment as he attempts to drive one up an active volcano in Iceland and The Stig rips up the track in the new Bentley Continental Supersports. Plus, Richard gives the old Chevrolet Lacetti a dignified send off before he and Clarkson host a star studded tea party to welcome in a shiny new Reasonably Priced Car.

Elsewhere in the series, Jeremy, Richard and James attempt to find a trio of cars which are equally at home on the race track as they are at transporting a family to the shops, all for a budget of Ł5000. They then put them through their paces in Europe's home of speed: Germany; James makes a rare visit to the Top Gear track to test the Porsche 911 Sport Classic & Boxster Spyder, and the boys embark on a road trip across the South of England and end up undertaking a rather special chauffeuring job.

•  DVD will be released in a SteelBook case.
•  Also Available on Blu-Ray.

Fans of Top Gear will know exactly what to expect as the lads return for season 15 of Top Gear. All the favourites are there, the reviews of the sports cars that we could only dream of driving let alone owning, stars in reasonably priced cars, a smattering of challenges, and most importantly - The News.

For me I always look forward to the various challenges and this season has some of the more obscure - when it comes to the creation of a "cool" campervan, it's probably best not to cross over in to an episode of Grand Designs if you want to avoid annoying people on the motorway as Clarkson finds out. There is also a nice ode to the lost British car industry as the lads try to tell viewers why the cars weren't actually crap - yes Richard the leaking window of your Lotus was a design feature!

This season also brings in a new reasonably priced car for the stars to drive around the Top Gear test track following tuition from The Stig - the racing brown Kia Cee'd, or as it's jestingly referred to throughout the season, the Kia C apostrophe D. The officially launch tea party for the new reasonably priced car saw a smattering of F grade British celebrities take to the track, most of whom we wouldn't have heard much about here ( Page 3 girl, Peta, 23 from Essex being a prime example) except for of course Richard Hammond's favourite, Angelina Jolie, who incidentally was doing a very good impersonation of Bill Bailey pretending to be Angelina Jolie. As the season progressed celebrities like Jeff Goldblum, Cameron Diaz and Tom Cruise also got the opportunity to put the C apostrophe D through it's paces - Tom Cruise's lap in particular was a highlight that can't be missed.

Top Gear is Top Gear, and as such someone who is not interested in cars or British laddish humour would probably not be interested in purchasing this DVD. But if like me, you do fall in to the target audience season 15 in it's nicely presented aluminium casing will make a welcome addition to your collection and will be one that you return to over and over again. My only criticism is that like many British TV series, it's not long enough as the season is only 6 episodes in length, but then again, there's always the other Top Gear DVD's in my collection.

Score: 9.3
Product reviews for listing 1349: In Search of the Trojan War -  Type of Show: Documentary

Tales of Troy and its heroes - Achilles and Hector, Paris and the legendary beauty Helen - have fired the human imagination for 3,000 years. With In Search of the Trojan War, charismatic historian Michael Wood vividly brings to life the legend and lore of the Heroic Age in an archaeological adventure that sifts through the myths and speculation to provide a fresh view of the riches and the reality of ancient Troy.