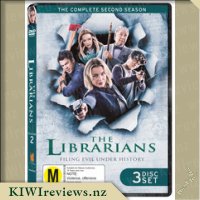 I had thoroughly enjoyed the first seasons of The Librarian, so was most excited when it was confirmed that a second season would be filmed, so more the happier was I when I got season two in the mail to review. Having three kids sick with food poisoning (not my cooking) proved to be the best time to have a 1st season marathon followed by this season. This round starts a few months after the events of the previous ending and does a good job of bringing everyone back together, giving us an update and introducing the seasons new baddie, Prospero (from Shakespeare).

The show does a good job of balancing the main storyline with Prospero whilst letting other stories in and not having them taken over by it, even some of the episodes focused on the fight against him still had plenty of other elements to it. One of my favourite episodes invoked the gang being stuck in a game and Jones having to be front and centre, there's also a twist on the tale of Dorian Grey which I thought well done. What I really liked was the character development, especially between Carson and Baird, the last season saw them running off together but this season shows the strain between them wee ns suits their characters well. Oh, best cameo... John De Lance as the "Devil" in an episode, he does play that type of character so well!

While I felt that the biggest let down was the actor who played Prospero, he just wasn't the best, everything else in this season was lots of fun and I thoroughly enjoyed it. Fingers and toes crossed we get a third season.

Criminal Minds revolves around an elite team of FBI profilers who analyze the country's most twisted criminal minds, anticipating their next moves before they strike again. Special Agent Jason Gideon (Mandy Patinkin) is the FBI's top behavioral analyst and he joins the Behavioral Analysis Unit lead by Special Agent Aaron Hotchner (Thomas Gibson), a family man who is able to gain people's trust and unlock their ... more...