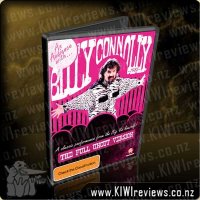 One night only with the Big Yin in a classic performance

"It's decidedly average to be here"... The one-and-only Billy Connolly descends on London for an intimate one-night-only audience with his peers. From shouting and swearing, to long-winded stories about priests and how to have a fulfilling life when you're incontinent, Billy recounts hilarious anecdotes, side-splitting tales of life in Scotland and the world we all live in, along with funny walks and comic improvisations. This is Billy Connolly undressed, uncut - and never better!

Having had the pleasure of sitting through one of his live performances many years ago, and having chatted to the man in person once (briefly) I can honestly say that this is classic Billy Connolly at it's finest.

Irreverent and inappropriate, the man has no sense of social boundaries, and that makes him able to tell it like it is, in the most entertaining way possible. His many talents include the ability to play a multitude of musical instruments, tell a plain story as though it was an epic, find the funniest aspects on the mundane and display them to us in all their glory, so that instead of being bored, shocked or offended, we are instead nearly wetting ourselves with laughter at the irony, stupidity and/or incredulity of it.

I saw the 50 minute broadcast edition many years ago, but I have to say the 100 minute uncut version shows just how prudish the broadcasters were back in the late 80's, because all the really funny stuff is now available on this disc, in the uncut 100-minute performance.

Overall, an excellent entertainment for the adults. This is not really suitable for the little kids... they probably won't understand the jokes, but mimicking BC's antics will undoubtedly land them in a lot of trouble later... right when you LEAST want them to be spouting such lines. ;) I can't really say much more on this - it has no plot, no actors (except as audience members), and no special effects... but it's an hour and a half of solid entertainment sure to have you in stitches.

From Emmy Award-winning executive producer and creator Seth MacFarlane (Family Guy, "Ted", "Cosmos: A Space Time Odyssey"), The Orville is a live-action, one-hour space adventure series set 400 years in the future that follows the U.S.S. Orville, a mid-level exploratory spaceship. Its crew, both human and alien, face the wonders and dangers of outer space, while also dealing with the problems of everyday life.