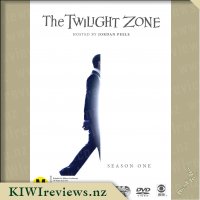 Hearing the news that The Twilight Zone was getting an updated, modern version brought to our screens, I was both excited and had some trepidation about the ability of the producers maintaining the ethos of the original series without feeling the need to up the violence and such. Over the last few months I have been watching the original series of The Twilight Zone, enjoying the storylineŌ ™s and noticing a few recognisable faces. TodayŌ ™s Twilight Zone sticks with the originals slew of recognisable faces, though there have been a couple that I havenŌ ™t recognised. The intro theme is virtually the same, theyŌ ™ve given it a little bit more of an edge but I love that they didnŌ ™t drastically change it.

Popping the discs in, there is no ŌśPlay AllŌ ™ option, instead you need to go into each episode, which has its own little menu. I liked this though, as each little menu had the episode, the episode promo (aka ad) and then a small clip usually with the lead, discussing the episode and itŌ ™s theme. I really liked this and thought that each one being there with itŌ ™s episode made it easier to follow and could be watched immediately. Some episodes also had a deleted or extended scene to view. Jordan Peel does a good job standing in SerlingŌ ™ shoes, he uses a similar tone and way of speaking that Serling did, which fits so well and I love that they didnŌ ™t go with a carbon copy of Serling. The series also uses similar wording and my mum and I had gotten hooked on saying Ō£Into the Twilight ZoneŌØ with the original series, so weŌ ™re pleased we can continue that here.

An episode that did well at drawing us in and setting the scene, was ŌśNightmare at 20,000 FeetŌ ™ as our main character became increasingly paranoid it was easy to see how he was being manipulated by one other character but how he was too far gone to really notice it. There were parts where I found the podcast narrator to be annoying but overall it worked well. Given how much violence, both physical and verbal, gets added to updates, the ending had me momentarily concerned, however it didnŌ ™t go how I expected and left us knowing what was going to occur without having to show us. Another episode touched heavily upon racial profiling as a woman tried desperately to get her son to university safely, while a racist cop seems to have it out for them. ItŌ ™s also this touching on important, current events that continues to follow the ethos of the original show. One episode has a child running for president, whilst we didnŌ ™t enjoy this one as much, given the current president it felt true enough (other than the age of the would be president).

There are moments which did leave us wanting more, but the original wasnŌ ™t perfect either. I love that this has continued the legacy of The Twilight Zone and endeavoured to not alter itself too much to be new and hip. IŌ ™m looking forward to the next season.

Entry to Te Manawa is free. There may be a ticket charge for any major exhibitions.

Te Manawa is new, innovative, different, open, flexible and modern. Te Manawa is a place of ideas, exhibitions and collaborations Te Manawa is an Art Gallery, Museum and Science centre, a meeting place, a party venue, a performance space. Te Manawa is for me, for you, us and them, strangers and locals, for travellers and residents, it is a place for ... more...