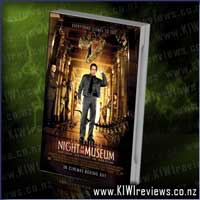 Night at the Museum product reviews

When Larry Daley (Stiller) is hired as a museum night watchman he soon discovers that all the exhibits come to life after the sun sets. Suddenly, Larry finds himself fact-to-face with a frisky T. Rex skeleton, tiny armies of Romans and cowboys and a mischievous monkey who taunts him to the breaking point.

But he may just figure out a way to control the chaos and become a hero in his son's eyes. Boasting jaw dropping special effects and laugh-out-loud moments, NIGHT AT THE MUSEUM is your ticket to nonstop fun!

I have seen bits and pieces of the movie but not enough to know the story so when a friend suggested watching it as it was on TV I thought it would be great to see the whole movie and not have pieces missing.

The special effects are great, I loved the miniatures and how well the different personalities worked out. Some parts had me laughing and if history was presented to kids in a fun way I am sure that a lot more kids would like history a lot more. The actors did a great job, not sure how I would react to things coming to life around me rather unexpectedly.

The writers showed a lot of humour in some of the dialogue and that helped make the movie a lot more interesting. People always judge the acting and sets but forget about the writers, sometimes the storyline is a flop but this one delivered.

I like that it is a family movie that my young kids can watch and ask questions if needed and that I can answer the questions with fact instead of guessing what happened. I really think history is great and all kids should have a basic knowledge of history. I will be happy to add this movie to our DVD collection.

I am a Ben Stiller fan. I find his movies relaxing and no-brainers. I went to see Night at the Museum when it first opened at the movies. I don't often see movies in the theatre because if I down for long in a dark room I'm asleep. This certainly didn't have me nodding off.

As an educated adult I got much more out of the movie than a child would have. The children in the theatre enjoyed it and were laughing along but they wouldn't have known the historical characters and how funny it was to have these famous people from different era and parts of the world interacting. Genghis Khan with cowboys it is so wrong yet in some ways believable.

I have since watched the movie and it's sequel on TV and am amazed at how many movie stars appear in them. Night at the Museum is a very light-hearted movie about a hapless dad that need to prove himself to his son and the museum whose displays come to life when it is closed. If you don't take the movie seriously and spot all the historical inaccuracies you will enjoy it.

I went to see Night at the Museum when it came out at the movies. I was looking for something light-hearted and fun. I was not expecting much from this film though. I'm just not a huge Stiller or Wilson fan.

The story is a familiar one for American film. Dad lets down family. Mum tries to get Dad to see that their relationship with kids is poor. Dad tries crazy stuff to fix relationship. In the end, there is a moral/life lesson to learn. Its very similar to movies like Mrs Doubtfire and Liar Liar.

Happily there is more to this movie than just the loose plot. There is magic and mayhem. Baddies, goodies and some good old fashion slapstick comedy. Robin Williams is brilliant as always. The scenes between Stiller and the monkey are gold. The computer graphics are pretty good as well. Loved the t-rex skeleton!

This has a brilliant adventure, race against time going on which is very exciting. I was on the edge of my seat at the end. For a movie I wasn't expecting much of, I really enjoyed it.

I think that the first thing that I would have to say that I love about this movie is that our main character, is not a perfect man nor a perfect dad. He's struggling and wants to best by his son, so sticks it out at a job he thinks it absolutely crazy. He is so believable because he stuffs things up so easily. From job hopping, to saying the wrong thing to his crush, to mucking things up at his job. It's so human, and so very believable.
The characters, fantastic! And a good source of some history tid-bits. I never knew that Attila loved magic until I saw this movie.
It was great to see Mickey Rooney & Dick Van Dyke in a movie, having loved them when I was a child, here they are again but as less than nice characters, and I loved them dancing at the end, during the credits, Van Dyke still has the moves.
I can think of nothing I would change with this movie, and I loved listening to the commentary.

Ben Stiller lives up to his usual idiotic style in this movie, but manages to hold back on the usual over-the-top, cringe worthy moments that are usually found in most of his other movies. Comedy mixes with a taste of history as Stiller's character takes on a new job as night watchman at the local Museum, where a golden tablet has the power to bring the past to life at night. With a cast featuring many great names (such as Mickey Rooney, Owen Wilson, Robin Williams, and Dick Van Dyke), this is a movie that will have you laughing in your seat if you're a Ben Stiller fan, or maybe just giving a few chuckles if you're not (as my partner, who REALLY dislikes Stiller, grudgingly found himself doing several times during the movie), as you're constantly wondering what will happen next. A T-Rex skeleton playing fetch with its own rib bone; a huge stone head making bubbles with bubble gum; a capuchin monkey peeing on Stiller- these are just a few of the antics that make this a light-hearted movie that the whole family will enjoy.

I have never been a fan of Owen Wilson or Ben Stiller, and any movie that has both of them in it is never going to be overly appealing to me... but when I happened to wander into the lounge while my son was watching it, and saw Ben running for his life from a skeletal T-Rex, being called a dum dum by an Easter Island stone head (good judge of character, that head) and having his face going slowly numb from the onslaught of tiny poison-tipped arrows being hurled by a few hundred tiny Mayans... I thought "Well, this can't be all THAT bad..." and plonked myself down to watch some more.

By the time the movie ended, I had chuckled my way through it without having my brain dribble out of my earhole, so figured it might actually be a semi-decent movie after all. Though I still say Stiller needs to revisit his acting style... by getting some... he's probably the right man for this part. Another slight shudder-inducing actor to make an appearance is Ricky Gervais... I just can't stand the guy... but thankfully he only pops up in a couple of places, playing the Museum Curator, Dr. McPhee.

So saying, one of my favourite actors, Robin Williams, plays a prominant role in this flick as President Theodore Roosevelt, almost always seen mounted on horseback. A hard case at the best of times, Williams does a pretty darned good job in this movie, and his presence was one of the saving graces really, along with an excellent performance by Carla Gugino as Rebecca, American history buff, and eventual love-interest of Stiller's character.

Overall, though not my favourite my any means, I actually found this movie to be quite entertaining, had a good plot that was well executed, and some good moral points throughout. The ending was good and strong, and was a logical conclusion to the progressing plot. Worth checking out, even if you aren't a great fan of some of the actors.

A futuristic sequel to 'Back to the Future' (1985). Accompanied by Doc Brown (Christopher Lloyd), teenager Marty McFly (Michael J. Fox) must travel thirty years into the future to save his own children from going to jail. Meanwhile, the aged Biff Tannen (Thomas F. Wilson) steals the Delorean time machine to return to the Fifties and make his younger self rich, creating an alternative 1985 timeline in which Marty's father, George, has been murdered.