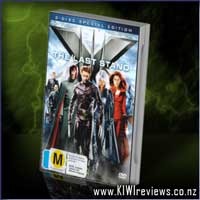 Gathered together by the mutant telepath Professor Charles Xavier in hopes of bridging the gap between mutants and mankind, the X-Men have been trained to use their diverse powers for good. The next chapter in the X-Men franchise finds the mutants still living in a society that mistrusts them. Struggling to find their place among humans, the mutants continue to face challenges.

In this 3rd segment of x men it holds surprises that we would not have even thought of before seeing this movie. With the people that play Storm, Cyclops, Wolverine they pull off there roles very well, as well as Hank McCoy who is also known as Beast.

The special effects in this movie are just spectacular, they leave you focused right to the very end and asking for more. I have found in some parts it gets very sad as heaps of characters getting hurt or worse. This is most definitely not one kids under the age of 12 should watch as it is gruesome, but if your kids like these type of movies then watch it before them to see if it is worth letting them watch. It feels like in this movies all the mutants band together but on different sides of what they are fighting for.

Personally I love this movie and it is one I can watch over and over again, Hopefully you love this movie as I have. It is one of those movies that every time you watch it you always find a part that you have missed or not seen before.

The amount of potential that this film had could drown... something that is incredibly difficult to drown. I had high hopes for this movie, and the plot was quite the undertaking. It spoke of a tide-changer that could inevitably result in an immense war of man vs mutant vs mutant. I honestly loved the plot. It provided a "scientific breakthrough", an item that could be seen as both a solution or a threat, depending on whether you are pro- or against mutants. But I fear it became too large.

The pure scale of mutants that were used in this movie became difficult to fathom. Each character trying to get their own little piece of screen time, the movie ended up fragmented, and widely dispersed. It became difficult to watch, and at that point you just try to poke holes in the plot. It goes downhill from there. Realistically, they would have been better off splitting this movie in twine. In entire movie for the final battle between the groups of mutants (because lets face it, the humans wouldn't stand a chance).

I certainly enjoyed the start of the movie, however. It presented a moral dilemma that took a toll on both sides, and placed a lot of emotional strain on relationships that had been forged up to two films ago. This film is necessary for any X-Men fan, but although a good film, it fell short of being great.

The animated series was one I watched regularly, and therefore, when the first of the movies came out, it was a must watch. Then, the second movie was added to my collection- so, of course, XMEN 3 could not get left out. Once again, the Xmen were battling for the chance to be allowed to live their lives as normally as mutants can, though this time round, not all survived- the death of three of the main characters, and the complete alteration of another was, I'll admit, quite a bit of an unpleasant shock. Although watched several times over already, The Last Stand is a great action packed movie that is well enjoyed each and every time it finds the DVD player, and my favourite of the three. New characters are introduced, while we are given further background on previous ones, as the rather strong and somewhat explosive debate about whether mutants need the new found "cure" or not causes chaos all round.
If you enjoyed the previous two movies, then it's quite likely you'll enjoy this one as well. Also, if you're one for enjoying the special features that often come with DVDs, then getting the special edition 2-disc set is definitely the better way to go, with many very cool features included- my favourite, by far, being the "XMEN - up close and personal" where you get to learn about the Xmen's history and powers, along with seeing interviews done by both the actors behind the characters, and the original comic writers.

Louis Ives fancies himself a young gentleman fashioned after his heroes in the books of F. Scott Fitzgerald. He dresses the part - favouring neckties, blue blazers and sport coats. But he also has a penchant for women's clothing, a weakness that leads to him losing his job as a teacher and a Princeton day school. He heads for New York City, where he rents a room in the madly discombobulated apartment of Henry Harrison, a failed but brilliant ... more...