Mary Queen of Scots and her Hopeless Husbands review

ProdID: 2871 - The Chronicles of Narnia - Voyage of the Dawn Treader
Directed by Michael Apted 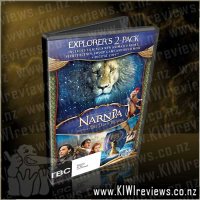 The Chronicles of Narnia - Voyage of the Dawn Treader product reviews

Return to the magic and wonder of C.S. Lewis' beloved world - via the fantastic Narnian ship, the Dawn Treader.

In this new instalment of the blockbuster 'The Chronicles of Narnia' motion picture franchise, Edmund and Lucy Pevensie, along with their cousin Eustace, their royal friend King Caspian, and a warrior mouse named Reepicheep, find themselves swallowed into a painting and on to the Dawn Treader.

Their mission - on which rests the fate of Narnia itself - takes the courageous voyagers to mysterious islands and a pool that turns anything it touches into gold, to fateful confrontations with magical creatures and sinister enemies, and to a reunion with their friend and protector, the 'Great Lion' Aslan.

I LOVE Narnia, and I have since I was a child, about 6 years old, and my mum was reading the books to me. A few years later when I was 9 I bought the entire book series as a Christmas gift. So when these movies started coming out I was very excited.

The good thing about this movie was that at least if you hadn't seen the first movie, it wasn't crucial to the plot of this film. Yes, you are left with a couple of questions but nothing you couldn't get past. The kids in this movie did a great job of acting and I really hope they make the next in the series.

If you are a fan of Narnia the this is a must see.

I know the other DVDs from "The Chronicles of Narnia" series were rather cool, but I think that this is the best one yet. The characters, or at least the unreal ones, looked like they actually existed. The action was great, and since this is the last movie in the series (or so I've heard), this really is a "Grand Finale" if I do say so myself.

My favourite scene was when everyone found out that Edmund and Lucy's cousin, Eustace, had tuned into a dragon after being tempted by a huge hoard of enchanted treasure, I was blown away by it! The way that the three kids were transported to Narnia this time was rather cool, I never expected that it would be a painting that came to life, so thumbs up for that!

I was rather disappointed when I found out that it was only Edmund and Lucy in Narnia this time, I thought that Peter and Susan would be in it as well; but it was no biggy, this film was still very fun to watch. The actual "Dawn Treader" ship looked amazing and it had a great design. I liked the way people could crawl out of the dragon head at the front of the ship.

The suitable age group for this film is somewhere around 10+ since it is a little scary in some places. If you've seen the other movies in this series, you are going to LOVE this one. It is sure to knock your socks off, trust me.

Alex the Lion (Stiller) is the king of the urban jungle, the main attraction at New York's Central Park Zoo. He and his best friends Marty the Zebra (Rock), Melman the Giraffe (Schwimmer) and Gloria the Hippo (Pinkett Smith) have ... more...