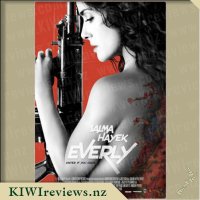 Disclosure StatementFULL DISCLOSURE: A number of units of this product have, at some time, been supplied to KIWIreviews by the company for the purposes of unbiased, independent reviews. No fee was accepted by KIWIreviews or the reviewers themselves - these are genuine, unpaid consumer reviews.
Available:
at selected online and retail stores I could sum up this entire film in two words; Kill Bill. If you know of Quentin Tarantino's cult-classic film "Kill Bill", then you would instantly know what to expect. A character thrown into the middle of a situation without any real form of backstory or explanation. Then add female assassins, and in the end a boss that she must defeat for the freedom of her child.

This movie took longer than I had hoped to properly explain itself. While 'Kill Bill' had a reason for the main character to not know everything that had occurred, there was no reason for a little bit of exposition earlier in the film. There were certainly some surprising points and some shock factor, but overall I was a bit confused as to what was going on for most of the film. It was almost as f there was no proper script to it.

It just ended up feeling a little unbalanced. Mixing extreme gun fights with housekeeping, and disembodied heads with babysitting. It was a mishmash of events that made little sense. All I could think of is how small the budget must have been as the whole film seemed to occur within one room and a hallway. There were a reasonable amount of camera angles and creative ways to see or hear things to keep it within the limited environment, but in the end, I really felt it did the movie no favours. It seemed to needlessly reduce possibilities, and lacked authenticity.

This film is all well and good if you want to see Salma Hayek shoot lots of people, but if you are after an engaging plot with characters that feel genuine, you certainly won't find it here.

School Can Be A Riot

St Trinian's, the infamous school for 'young ladies', is once again facing dire financial crisis. The bank is threatening headmistress Camilla Fritton with closure. Meanwhile her unorthodox doctrine of free expression and self empowerment is also under threat from new Education Minister Geoffrey Thwaites. He may be an old flame of Camilla's, but right now he's determined to bring ... more...