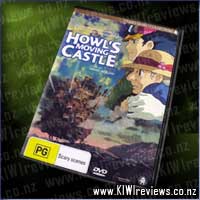 Embarking on an incredible adventure to lift the curse, she finds refuge in Howl's magical moving castle where she becomes acquainted with Markl, Howl's apprentice, and a hot-headed fire demon named Calcifer. As the true power of Howl's wizardry is revealed, and his relationship with Sophie deepens, our young grey heroine finds herself fighting to protect them both from a dangerous war of sorcery that threatens their world.

Astonishingly detailed and vibrant artwork, as one comes to expect from a Hayao Miyazaki film. (The castle itself would have delighted W. Heath Robinson, I'm sure.)

This is a delightfully entwined story of many people who are not what they appear to be on the surface. I really enjoyed the calm wisdom, and subtle humour of Sophie in the face of every situation she found herself in. I think what shines through is that it is not so much what life throws at us that defines who we are or what our outcomes will be, but we define those things by how we view and deal with the circumstances we find (or get) ourselves in each day.

This anime is not only beautiful art in motion, with an easy-on-the-ear soundtrack, but the story itself is rich and complex. I think this would be most suitable for viewers at least 12+ with sufficient comprehension and attention span to get the greatest appreciation of the story. I agree with the NZ classification statement that very young viewers might find some scenes quite scary.

Footnote for lovers of 'Making Of...' extras:
If you can get hold of the 2-disc Limited Edition pack (hard to come by these days) it has an awesome CG featurette (among other extras) that I would highly recommend for anyone interested in the making of the artwork/animation.