Children of the Stones review

ProdID: 2314 - Earth - The Power of the Planet
Type of Show: Documentary Series 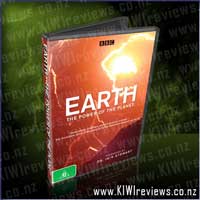 Earth - The Power of the Planet product reviews

This landmark five-part series uses specialist imaging and compelling narrative to tell the life story of our planet, how it works, and what makes it so special. Examining some of the great forces that shape the Earth - volcanoes, the ocean, the atmosphere and ice - this DVD explores their central roles in our planet's story revealing how these forces affect the Earth's landscape, its climate and its history.

CGI gives the audience a ringside seat at these great events, while the final episode brings together all the themes of the series and argues that Earth is an exceptionally rare kind of planet - giving us a special responsibility to look after our unique world. This is a series that shows the Earth in new and surprising ways. Extensive use of satellite imagery reveals new views of our planet, while time-lapse filmed over many months brings the planet to life. Witness a glacier flowing like a river towards the sea and a lava dome growing inside a volcano. Scientific sensors reveal the Earth's secrets, including a gravity anomaly map that reveals the meteorite crater that killed off the dinosaurs.

This has to be one the most awesome docos I have ever seen, bar none. Dr. Iain Stewart does a great job of presenting these five episodes, each one focussing on one of the major affectors of the planet's ecology. Of the five I have to say my favourite was the one on Ice. Such an amazing substance, water. The only substance commonly found that expands as it freezes. Soft enough to fall as snow yet with the potential to compress down to a substance hard enough to carve great chunks out of mountains.
Though Dr Stewart's accent can make him a bit hard to understand in places, the information itself is presented in so captivating a way you somehow manage to get a clear understanding. This guy is amazing. Don't get me wrong, he's no Sir David Attenborough, but in a way I think he's more accessible. His manner is more relaxed and engaging.
There is some great use of CGI in this series too, helping to reveal the inner secrets of such places as Iceland and the continental plate boundaries, even though many are buried under miles of ocean, at depths and pressures that would squash us into a ball small enough to fit into the palm of your hand.
All in all, this has to be one of the most fantastic series you could ever want to see. Entertaining, ewducational, accessible to viewers of all ages. Just the thing to keep the whole family enthralled on a soggy weekend.

She has no past. She has no family. She was raised in an orphanage. So, she lives for what she does best: be an FBI agent. Thatā ™s why Audrey Parker is sent to a distant Maine village called Haven, to investigate the crime of a prison fugitive. What she does not know, is that her past is connected to that village, that old threats from the past are coming back, and she is going to be a central piece on everyoneā ™s li­feā¦or death.