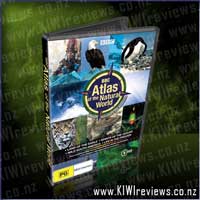 From the BBC's internationally renowned, award-winning Natural History unit comes the first release in an ambitious undertaking. BBC Atlas of the Natural World brings together BBC landmark series to provide a unique survey of life around the globe, in all its remarkable richness and beauty.

The four programmes included in this six-disc set are: Land of the Eagle (North America), Spirits of the Jaguar, Wild South America (Central America & the Caribbean) and Life in the Freezer (Antarctica). These eye-opening and staggeringly beautiful programmes combine to give one of the most comprehensive portraits of the Americas and Antarctica ever assembled. This box set offers an astonishing diversity of wildlife and habitats, as well the story of human migration across Western lands, providing a subjective view of the environments which people explored and settled over many thousands of years.

With over 18 hours of material, viewers will explore the vast richness of the land, wildlife and peoples of these miraculous regions.

Each series in this collection may be viewed in Enhanced Content Mode, in which pop-up windows will periodically appear during the program featuring added factual content.

When it comes to Natural History Documentaries I've seen, "Atlas of the Natural World" has definitely jumped to the top of my favourites list!! At first glance, I'd thought it was merely another wildlife doco... but no, it is so much more than that! This is a doco series that is rich in fantastic time lapse photography and amazing footage that only the BBC seems to capture (eg. insects being filmed as they are enveloped in tree sap), as well as covering the way the land has changed, and the people who lived on it. The "Spirit of the Jaguar" disc was definintely my favourite, with its coverage of the Mayan and Aztec people, and even my 9 year old son has watched this particular disc several times. My next favourite "section" would have to be the "Wild South America" disc, especially episode 5... "The Amazon Jungle". Such a HUGE variety of animals in one place!! It looks like such a wonderful place to visit... yet this particular episode shows just how unforgivingly harsh and brutal it really is.
The last disc, "Life In The Freezer", was really the only thing that let this series down for me... and that was simply because penguins have been featured in wildlife documentaries a few too many times. Don't get me wrong, I love penguins... but there are already so many docos out there on penguins, and this one didn't really cover anything new. Even Sir David Attenborough didn't do anything to improve this section. A shame really, as I normally rather enjoy the documentaries he narrates.

A huge variety of animals were covered in this documentary, although it was a pity that it only covered the Western Hemisphere and Antarctica, especially with a few patches seeming to be repeated. However I am very much looking forward to the next volume in this series, and I know that these are definitely dvds I will be watching over and over. I've already watched them through a few times, and each time I spot something new. The perfect addition to any animal/nature/history lover's collection... and a great resource for kids too!!

At Last The 1948 Show triggered a revolution that changed the face of TV comedy forever.

Bursting onto small screens in an explosion of unrelated and often surreal sketches, its main perpetrators were John Cleese, Graham Chapman, Marty Feldman and Tim Brooke-Taylor, with special guest appearances by Eric Idle, Jo Kendall, and 'The Goodies' Bill ... more...